3
[view]
“A staff that allows allies to move again.”
—In-game description from New Mystery of the Emblem

Anew is a special Staff that debuted in Fire Emblem: Mystery of the Emblem.

When cast, this staff will bestow an additional turn upon all ally units on the current battlefield, in a fashion similar to that of a mass Dance. This effect is nerfed in the later games, however, where the staff is only capable of refreshing the turn of one ally unit at any one given time.

In Fire Emblem Echoes: Shadows of Valentia, Anew is a spell that can only be learned by Faye. She will learn it once she's promoted into a Cleric, then into a Saint, and then reaches level 14. 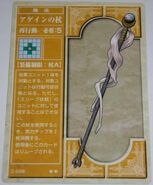 The Anew Staff, as it appears in the fifth series of the TCG.