Anguilla is one of the twelve Deadlords, and appears in Fire Emblem: Genealogy of the Holy War and Fire Emblem Awakening.

In Fire Emblem: Genealogy of the Holy War, little is mentioned about the Deadlords, but they are all fought in the Final Chapter near Belhalla and eventually defeated, including Anguilla herself.

Anguilla is not fought in Fire Emblem: Thracia 776.

As Anguilla has the Wrath skill, it is thus highly recommended to battle her with a character possessing the Awareness. Such characters include Seliph, Ulster, Larcei, or Julia. However, as she primarily uses Thunder Magic, she is thus encumbered by the weight of her tome. As a result, she is not very difficult to defeat, as compared to other Deadlords, such as Ovis.

The Deadlords' names are Latin words for the animals of the Chinese zodiac. The zodiac's sixth sign is the snake, which in Latin is anguis. Anguilla means "eel" or "little snake."

Sechs, Anguilla's Japanese name, is the German word for the number 6. 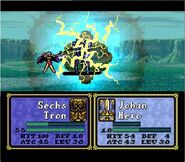 Anguilla killing Iuchar in Genealogy of the Holy War.