Fryda Wolff
[view]
“Your Highness, this is the only life I know. Please, you don't need to get so emotional.”
—Annand to Lahna before entering her final battle

Annand is a non-playable character from Fire Emblem: Genealogy of the Holy War. She is the captain of the Silessean Pegasus Knights and the older sister of Erinys as well as the aunt of Ced and Fee. She is one of the Four Heavenly Knights of Silesse and trained alongside Pamela. Lewyn states that he once had a crush on her.

Annand first appears at the end of Chapter 3 when she is sent as a messenger by Queen Lahna to offer asylum to Sigurd's army after they are declared as traitors by Grannvale. At the start of Chapter 4, she almost reveals Erinys's true reasons for wanting to remain at Lewyn's side. After the fall of Tófa Castle to Sigurd, Annand enters a battle against Pamela in defense of Silesse Castle. However, Pamela is reinforced by Andrey and his Beige Ritter, who quickly annihilate Annand and her squad. This causes shock and grief to Lahna, Lewyn, and Erinys.

Her niece, Fee, names her pegasus steed after Annand in memory of her.

Annand appears in Chapters 3 and 4 as an unrecruitable NPC unit.

As the leader of the Silessean Pegasus Knights, Annand has higher stats than any of the other four Angelic Knights of Silesse. Sadly enough, she is ill-equipped to fight against Pamela, and the unexpected arrival of Andrey and the Beige Ritter make matters worse.

Knight-Defender
Leader of the Four Heavenly Knights of Silesse and Erinys's elder sister. Conceals her longing for Lewyn and fights to her last breath. Appears in Fire Emblem: Genealogy of the Holy War.

Annand is illustrated in the trading card game with the following cards: 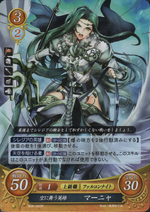 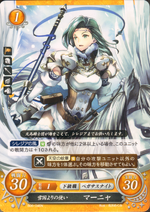 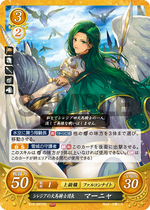 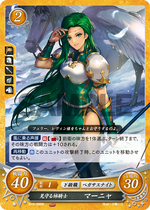 Annand is a variation of Anand, an Indian name meaning happiness.

It is also a Scottish surname.