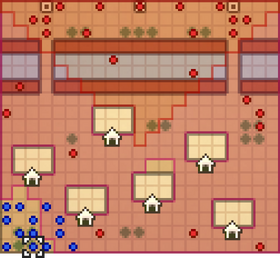 Chapter script
[view]
“The plan to launch an attack on King Garon is a failure. The group narrowly escapes a Nohrian army led by Xander, somehow making it safely to Cheve.”
—Opening narration

Another Hope (魂は屈せず Tamashī wa kussezu, lit. Unyielding Spirit in the Japanese version) is Chapter 13 of Fire Emblem Fates in the Birthright Version. This chapter takes place in Cheve.

The biggest threats are Camilla (The boss, a level 5 Malig Knight that can use both axes and tomes) on the top corner at center, the two Generals (level 1, on hard mode each of them are paired with an Outlaw) at the bridges, and Hans (level 2 Berserker) that is on the right middle of the map. On hard mode you will also have to worry about a Wyvern Lord (level 2) that is over the river whose high movement of 8 can reach a big part of the map.

All the dragon veins around the map call a lightning that causes all units in the area, both allies and enemies, to drop to 1 HP, no matter what their max or current HP is. So take care around those if you have any ally on the area. The one at the center of the map can be useful against enemies on the left side of the upper area after Camilla makes her first move, you should wait for Selena and the three other units to be in range before activating it. Also, Camilla can use one if your units get too close to the left bridge.

If you want the items that you can obtain from the houses, you should hurry up and kill the outlaws or enter first inside the houses.