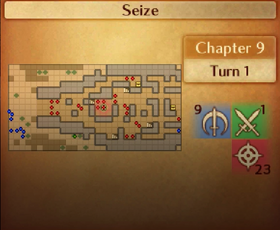 Another Trial (再びの試練, Futatabi no shiren A New Ordeal in the Japanese Version) is Chapter 9 of Fire Emblem Fates in the Conquest Version. This chapter takes place in Fort Dragonfall.

Azura becomes a player unit right from the start in the southeastern part of the Fortress. She retains the stats from Chapter 5. She is unarmed, only carrying a Chest Key and some Vulnerary. (The Chest Key can be used to obtain Brass Naginata.) A relatively low level samurai patrols her area. Although not required for victory, it is possible for Azura to evade the samurai and use the Dragon Vein that triggers an acid rain which in turns drops most enemy units' HP to 1. (It is possible for Brass Naginata equipped Azura to defeat the samurai.)

The enemies are naturally separated in groups. Fighting them one after another is straight-forward. The use of Guard Stance can be handy from time to time when baiting an enemy group into player's formation. Beware of Seal Defense skills on certain units in Lunatic and Hard mode. Player units whose defense is sealed will not survive multiple attacks under Attack Stance—even with Elise's and Felicia's damage mitigation skills—unless, of course, the player unit in question is in Guard Stance.

There are breakable walls south and north of the castle. Player is informed of such walls during the recruitment dialogue with Nyx. It is possible to use those wall tiles as choke points to fight off specific enemy groups, although that is hardly required even in Lunatic mode. The northern chest contains a Rescue Staff. However, the player units entering the main approach to the chest can be sniped by archers in Haitaka's square chamber using Attack Stance. It is thus advisable to either bait and pick off those archers or to use the breakable wall to circumvent their blockade. (The player can also choose to capture any of the archers since the command has the same range as the weapon equipped. Captured archers can be used to man ballistas later if the player so desires.) It is also advisable to bait and fully exhaust the Enfeeble staff of the Shrine Mainden before approaching any enemy unit beyond the first group and the two samurai in Guard Stance at and behind the main entrance respectively.

The enemy reinforcements can be the biggest challenge of the map. See below.

Haitaka carries a Steel Nageyari, which is an enemy-exclusive weapon. On all modes, he comes with Rally Defense; on Hard, he gets Strong Riposte which adds +3 damage for counter attacks; and on Lunatic, he has learned Seal Defense. His Rally Defense may assist the player in the upcoming chapter. The possession of the mercenary skill Strong Riposte and good growth rates are other interesting traits of Haitaka. Niles is required in order to capture Haitaka, as well as having the Prison built before starting Chapter 9.

3 groups in total. There is a group of 3 archers, 4 spear fighters and 2 samurai respectively.

The area upon within which reinforcement is triggered is not precisely rectangular. The area include the tile (10, 21) for example, which is outside the main rectangle. Nevertheless, it is possible to clear all combatants other than Haitaka before triggering the reinforcements. It is also possible to not fight any or all of the reinforcement groups by selectively covering the stair tiles.

In Lunatic mode, one spear fighter is equipped with a Bolt Naginata. Be cautious that a physical tank such as Effie cannot survive his double.

One other spear fighter is equipped with a Dual Naginata. An archer has a Shining Bow.