Jake (Enemy, talk with Caeda, exclusive to New Mystery of the Emblem)

Chapter script
[view]
“Seeking the lightsphere, Marth and his friends headed for the Tower of Thabes. Thabes is an ancient city buried under the sands, along with many treasures. The legend of Thabes, the city of illusion, lured many adventurous men to the desert. However, in the end, not one of them ever returned. As the sages once said… stay clear of Mamorthod, the Desert of Death, as there lies a cursed Dark City...”
—Opening Narration, New Mystery

Anri's Way is chapter 11 of Fire Emblem: Mystery of the Emblem and its remake.

This chapter is not too difficult. If you bring along the newly recruited Arlen or Merric, Jubelo as well as Linde, you will be able to make use of their ability to walk across sand without movement penalties, as the entire chapter is sand. Flying units such as Caeda or Minerva are a good idea as well. In the remake, make sure Caeda is deployed in order to recruit Jake. He is located up north very close to the Secret Shop and you can take your time to recruit him. Since he's an enemy unit, other enemies cannot harm him. He also should not engage anyone who is within his range, meaning your fliers are safe from his Killer Bow, which he will also arrive with. A promoted Wrys, Marisha or Yumina are also very useful for this chapter, due to being Bishops. Julian or Rickard should always be present here as this chapter is filled with hidden items. After the preparations you should split the group in two, one heads up the right side and the other head left toward the tower, but be careful about the Flying Dragon enemies. Lure them out with a tank, and position Merric to attack them with Excalibur, though Shaver works well too, especially if you want to conserve Excalibur uses. At the top there is a Swordmaster near the bones, it is advisable not to fight him up close as his Critical rate is high due to the Master Sword. Have Linde, Merric, or Arlen use their strongest magic on him to kill him. While you progress through the chapter, make sure to have your thieves move around collecting the hidden treasures, though keep an eye on the dragons' movement, lest you accidentally send a thief to his death.

However, an alternative strategy would be to hold your units back into a corner to form a wall to protect your ranged units and thieves. Remember to have units with good defense and have vulneraries ready. Continue to do this until the Flying Dragon enemies are all defeated and then move ahead without worry of suddenly being attacked by Dragons and instantly killed.

The secret shop is located ten spaces to the left from the upper right corner of the map. It is marked by a skull. 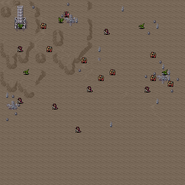 Chapter 11 map from Fire Emblem: Mystery of the Emblem. 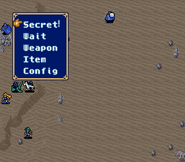 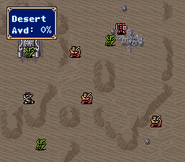 The map of Anri's Way in Mystery of the Emblem.