The Apothecary is a combat physical class that debuted in Fire Emblem Fates.

Similar to playable Villagers in Fates, Apothecaries wear common clothing with little standing out on their kimono. They also have a traditional straw hat worn by farmers and carry a wooden trunk containing their merchandise, money, tools and equipment. Both are available as an accessory in the My Castle Accessory Shop, although the hat and trunk are one whole accessory that can be worn on the 'arm' area of a unit.

Apothecaries wield Yumi to protect their merchandise. They are very similar to Archers, but have superior Defense and inferior Skill and Speed. Their abilities allow them to use healing items such as Vulneraries much more effectively than other units, further improving their durability.

Apothecaries' defensive stats allow them to withstand a few hits compared to Archers; this combined with their class skills allows them to prolong their longevity with healing items and get more effectiveness out of them while picking off enemies or weakening them for other units to finish off. Despite the Resistance boost they get from wielding yumi, it's usually still low enough for them to sustain a strong magic attack, so using them to engage tome users is ill-advised unless proper support is provided. Faster units such as Sky Knights, Archers and Myrmidons are also able to outpace Apothecaries to inflict a fair amount of damage to them (as well as the latter two having stat and weapon advantages respectively), which can put them in dangerous situations.

The class skills of the Apothecary are Potent Potion and Quick Salve. Potent Potion causes healing items such as Vulneraries to recover more HP, and the stat boosts that come from tonics have greater increases when used. This allows them to last longer in skirmishes as well as provide aid to allies (through use of Azura's Salve) when a healer isn't immediately available. Quick Salve allows them to act again after making their movement through use of a potion or tonic, which lets them retreat to safety and heal themselves, boost their desired stat and attack an enemy in range, or take cover behind an ally and provide support for them. The combination of these two skills together provides the Apothecary with a slew of options for battle as the situation calls for.

Apothecaries are a very rare enemy type. In Conquest, they appear only on one chapter, Bitter Intrigue. They might be seen a little more frequently in Birthright and Revelations Challenges.

An Apothecary is an obsolete term for a medicinal professional who supplies Materia medica, medicinal plants, to physicians, doctors, and patients. A pharmacist is the modern day equivalent. 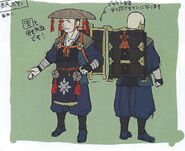