Not to be confused with Arran.

Soldier
[view]
“Then...from now on, I'm fighting for what's right...just like the abbot taught us. Come on. Let's get you--and everyone else--out of here!”
—Aran, talking with Laura.

Aran is a playable character from Fire Emblem: Radiant Dawn. He was initially a Soldier fighting with the Begnion Occupational Army in Daein, but later joins the Dawn Brigade and the Daein Liberation Army.

Aran is a childhood friend of Laura, having lived in Kisca with her for a good part of his early life. He was orphaned in Daein as a child, and was afterwards adopted by a merchant family who lived in Begnion. Aran eventually joined the Begnion Army to express his gratitude towards the country that had given him refuge.

Aran was initially posted as a guard at Glaive Prison, one of the Begnion-controlled prisons in Daein. However, when Laura is taken prisoner by Begnion's forces, Aran secretly allows the Dawn Brigade to sneak into the prison to rescue both Laura and Micaiah.

In the following battle that ensues between the Dawn Brigade and the Begnion Guards, Aran appears as part of the enemy forces. When he is later confronted by Laura, Aran decides to enlist into the Dawn Brigade, which will later become part of the Daein Liberation Army.

In the game's epilogue, Aran, hailed as the Loyal Halberdier, will serve as a lookout for his hometown for many years. He is said to be largely relied upon, in spite of his clumsy work.

Aran, like most members of the Dawn Brigade, does not receive substantial amounts of character development. Based on his supports, epilogue, and most of all, his recruitment speech, it is easy to deduce that he is a relatively simple individual, attempting to do good as far as possible. Aran also appears to be sensitive and kind, especially in regards to Laura. This can be seen in the events of Chapter 1-3, where he is confronted by Laura about his choice to serve in Begnion's army. Aran ultimately heeds Laura's advice, and opts to defect into the Dawn Brigade.

This same soft spot of his is revealed once more in Chapter 3-13, in the form of a base conversation he shares with Laura. In this conversation, Aran finds a Sleep staff on the ground and offers it to Laura, unaware of its abilities. Laura says that she's never seen one like it before but shakes it which results in Aran falling asleep mid-conversation.

However, Aran is known to express intense distaste and disgust for individuals he particularly loathes. When sent to engage Numida in battle in Chapter 4-3, his battle conversation reveals snide disdain for the senator.

* Only if lance rank is at B or lower.

Aran's growth rates are similar to that of an Armor Knight's. His growths in Strength, Defense, Skill, and HP are rather high, which he caps with relative ease. Once he starts leveling up, he will become a tank-type unit, as he can withstand many attacks from even a Tiger, alongside having enough Defense to take a fair amount of damage from the Greil Mercenaries before having to be healed. Aran's high Skill and Strength give him the ability to deal abundant amounts of damage to just about any enemy unit he engages in battle. This makes him useful for the Dawn Brigade's chapters, as the majority of its units are rather fragile.

However, Speed is Aran's greatest flaw. He has difficulty in performing double attacks, although he generally has enough Speed to avoid getting double attacked. His combination of low Speed and even lower Resistance make him little more than fodder for magic units, which is especially problematic in Part IV, where most enemy Beorc units are magic users. This problem can, however, be solved maxing out Aran's Strength, Skill, and Defense before spending Bonus Experience on him or giving him Zihark's adept.

In Hard/Maniac Mode, where wasting experience can be a critical mistake due to the limited bonus experience, Aran can take a bit of effort to level, but his extreme strength, skill, and defense growth rates can allow him to serve as a tank unit if he is leveled fast enough and has enough time to level in his lance rank. Due to how characters can fall behind very quickly in Hard Mode even if they are given enough experience to level, Aran's only main competition for experience in Hard Mode comes from Micaiah (whose usage is mandatory), Nolan and Jill. Admittedly Aran can fall behind if he is not given adequate experience immediately, and while it will still be a bit difficult to train him, his insane defense growth can allow him to develop very quickly as a tank unit; initially Aran will have difficulties competing with Tauroneo once the latter is recruited, but the removal of the weapon triangle in Hard and Maniac Mode allows Aran to have an easier time facing Axe users, though he should still be careful around them until his HP and defense have properly developed.

Laura: Aran? I can't believe it! It IS you!
Aran: Laura!
Laura: I knew it! But, Aran, why? Why would any true Daein join sides with Begnion?
Aran: A true Daein? I'm not sure I still am one... Not since a family of merchants from Begnion took me in... But I could never do anything to hurt you. You've always been like a little sister to me. Get out here, Laura...while you still have a chance! I'll turn a blind eye.
Laura: But what about Micaiah and Sothe? They've risked their lives fighting for the abbot—and for me. I couldn't possibly abandon them now, not even if it meant saving myself.
Aran: Oh, bother...
Laura: What's wrong?
Aran: I can't keep lying to myself any longer. I know what Begnion is doing in Daein is despicable, and I can't support it.
Laura: Then...
Aran: Then...from now on, I'm fighting for what's right...just like the abbot taught us. Come on. Let's get you—and everyone else—out of here!
Laura: Wonderful! Thank you, Aran. I knew it. You haven't changed a bit. you're as considerate as ever. Your family would have been so proud!

Numida: Aargh! Where are my guards? Why do I have to be the one to fight?!
Aran: That's right, I remember how you are. You let others do your dirty work while you run for safety. Looks like you're running out of places to run, Senator.

Aran served for many years as lookout in his hometown. Everyone relied on him for his honest, if clumsy, work.

Aran is illustrated in the trading card game Fire Emblem Cipher with the following cards: 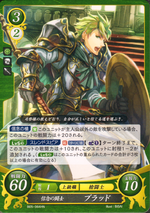 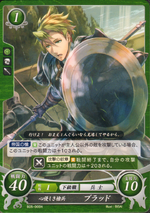 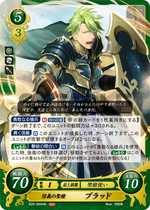