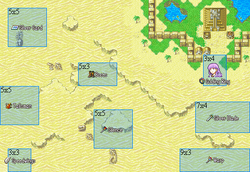 Chapter script
[view]
“After rescuing Guinivere and Cecilia, Roy headed towards the Nabata Desert, following Sophia's lead. According to her, the village of Arcadia was located in an oasis hidden in the desert. However, Arcadia was already under attack by Bern. Roy suspected their aim to be the Dragons that were said to inhabit the village. Although the Lycia Alliance Army moved as quickly as they could towards Arcadia, a vicious sandstorm stood in their way.”
—Opening Narration

When the chapter starts, Cecilia and Sophia both join your party. You're in the desert, so mounted and armored units will have to move very slowly (Generals can only move one space at a time, so assist them via rescue command.) However, flyers and magic users (non-mounted ones) don't have that problem. Elen or Saul would be a much more valuable healer than Clarine for this map, due to the movement reduction.

Weapons that do extra damage to wyverns will also be effective against the 3 manakete opponents, and your Mages are the best choice for this map, as they will cross the sands unhindered, and can cause a lot of damage to the swordsmen, axe fighters and wyvern knights and lords. Also, the Mages can counter the Bishops and cancel out with the enemy Mages.

Falco knights are the 2nd best choice for this map, since they can counter the axe men with their swords, swordsmen with their lances and mages/bishops with their high resistance and can cross great distances by flying. There are some mages with Aircalibur, though, and this can Critical your Falco knights, so don't overdo it. Also, they don't do well against the wyvern knights and lords.

This chapter won't give you too much difficulty if you can bring down their wyverns quickly, as their high movement and attack can make them deadly as they swoop in and out of the fog of war—using a thief's vision, or a torch staff, will likely be vital to your success.

At any rate, bring 2 thieves, just for a better chance of digging up the treasure and having as much intel on the mages and wyvern riders as possible (since they can move unhindered by the terrain). You only have 25 turns to get everything and complete the chapter if you want to go on to the Gaiden chapter.

As a friendly tip, you should consider giving the Boots item to Larum or Elffin as it will greatly help them to stay near units even after they rejuvenate them every turn. Also, they will need the movement boost in Ch. 15, so that they stay with the group but can still reach General Percival when he nears them.

This map makes a very good training map for Sophia, as she will have much more movement than the on-foot enemies and all of them but the Bishops will have low enough resistance for her to defeat them. If you plan on using her, it's best to train her as much as possible on this map.