-
[view]
“Mogall of great power. Their dark might far exceeds that of their lesser cousins.”
—In-game description from Fire Emblem: The Sacred Stones.

The Arch Mogall (アークビグル Āku biguru, lit. Arch Bigl in the Japanese version) is an enemy-only Monster class that is first introduced in TearRing Saga: Utna Heroes Saga. Stronger versions of the Mogall class, Arch Mogalls are nefarious eyeballs given life through fell magic, wielding either Thunder or Dark Magic as their weapon of choice.

In its original inception in TearRing Saga, the Arch Mogall class is known as the Arch Opus (アークオープス Ākuōpusu). The promoted form of the Opus class, Arch Opuses attack by means of employing Thunder Magic. Arch Opuses in this installment are also known to be the Queens of the Opuses, residing in swamps and consuming the life energy of humans for subsistence.

In The Sacred Stones, the Arch Mogall class is the promoted form of the Mogall class. Adopting a red colour scheme to distinguish themselves from their unpromoted counterparts, Arch Mogalls are far more deadly, possessing greater Magic and mostly using their more powerful Crimson Eye, although a few have appeared with their weaker Evil Eye instead. As with Mogalls and Gorgons, they are also capable of using Shadowshot.

Their high magic stat with the damage provided from Crimson Eye makes them extremely dangerous towards units with low resistance, although they have low health and like most monsters, have poor luck making it easy for most units to take them out.

In Echoes: Shadows of Valentia, the Arch Mogall class is called Balor and like the original incarnation of the Mogall, attacks by ramming.

Arch Opuses possess not only deadly Magic but also incredibly high HP and Defense, hence their uncommon appearances throughout the game. Their only weakness is being vulnerable to Bows as they are flying units.

In The Sacred Stones, Arch Mogalls are statistically similar to female Druids, possessing identical caps and marginally inferior base stats. Like generic Druids, their Magic is strong, a fact that is offset by their extremely poor Defense.

Compared to the Gorgon, Arch Mogalls are inferior to them in every way; the ones encountered in-game are rarely, if ever, capable of capping their Magic, have less health, Luck and Resistance. While Crimson Eye is still stronger than Demon Surge due to having three higher Might and 5% critical bonus, it's slightly less accurate and the high weight with their low Constitution often results in them being easily doubled in battle. Nonetheless, they should be handled with carefully as they can deal immense damage with their attacks.

Their name in Echoes may come from Balor of the Evil Eye. A figure in Irish mythology, Balor (modern spelling: Balar) was the tyrant warrior of the Fomorians, a group of supernatural beings. He is often described as a giant with a large eye that wreaks destruction when opened. 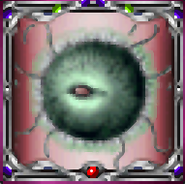 Generic class portrait of the Arch Opus from TearRing Saga.

Generic class portrait of the Arch Mogall from The Sacred Stones.

Generic class portrait of a Balor from Echoes: Shadows of Valentia.

Village sprite of a Balor from Echoes: Shadows of Valentia. 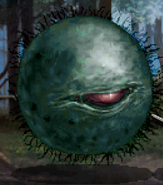 Battle model of the Arch Opus class from TearRing Saga.

Attack animation of an Arch Mogall from The Sacred Stones.

Map sprite of the Arch Opus class from TearRing Saga.