Archanea (アカネイア Akaneia, translated Akaneia in the Japanese and European version and Akanea in Super Smash Bros. Melee) is both the continent on which several games in the Archanea Series take place upon, situated to the east of Valentia, and also the name of the Holy Kingdom of Archanea, one of the many countries that make up the continent as a whole.

It would later be renamed Ylisse after the halidom of Ylisse, whose royal family can trace their bloodline back to Marth, and the royal lineage of Altea.

Roughly four thousand years prior to the founding of the Holy Kingdom, Archanea was originally ruled by the dragon tribe, led by Naga and the Divine Dragon Tribe. However, after three millennia, a great catastrophe befell the dragons, forcing them to assume Manakete form, while those who didn't degenerated into wild beasts. The majority of the Earth Dragons refused to become Manaketes, eventually turning wild and threatening to destroy mankind. Naga led her tribe to stop the Earth Dragons, sealing them all within The Dragon's Table, except for Medeus who had become a Manakete without his tribe's knowledge. Afterwards, Naga created the Binding Shield to stop the Earth Dragons from returning and died after giving birth to Tiki. Later, the Binding Shield was stolen by the thief Adrah, who removed the orbs and sold them. Using the money to raise an army and using the stolen weapons Gradivus, Parthia, and Mercurius, he would found the Holy Kingdom of Archanea.

Almost 500 years later, Medeus creates the Dolhr Empire, angered that humanity had brutally persecuted and oppressed the now weakened Manakete race. Dolhr waged war on Archanea, and in response Princess Artemis chose Cartas to wield the Fire Emblem and lead Archanea's army. For a time, it seemed that the tide was turning, but then Medeus joined the battle directly. It looked like all hope was lost until a youth named Anri appeared wielding the Falchion and slew Medeus. The heroes from this war would eventually create their own countries, Anri and his brothers founded Altea; Macedon was founded by Iote, a slave who rose up against Dolhr; and Aurelis was founded by Marlon, Cartas's brother. Artemis ended up marrying Cartas, but died giving birth to his son.

An Era of Prosperity

After the war, there was a great era of peace, during which Grust and Talys were founded. Grust was also founded by a war hero, a General named Ordwin. When Anri, king of Altea, died, inheritance issues caused the kingdom to be split between his two brothers. Marcelus became ruler of Altea and the other would found the kingdom of Gra. Gotoh would also create a magical kingdom in Khadein to educate scholars, two of which would be trained by him personally, Gharnef and Miloah. Eventually, Gotoh named a successor to the Aura spell, and since Gharnef lacked a compassionate heart, Miloah was chosen over him. Bitter, Gharnef defected from Khadein and stole another sacred spell known as Imhullu, which twisted his soul.

The War of Shadows

During peace, Dolhr recovered from its woes after the first war, and Gharnef rekindled the flames of war by resurrecting Medeus, who started a second war, with Grust and Khadein, now under Gharnef's control, joining his forces based upon pre-war alliances against Archanea, Altea, Aurelis, Gra, and Talys. During a battle, Gra, who was battling alongside the Alteans, betrayed them and joined Dolhr, in the process killing Cornelius and stealing the Falchion. Gra later captured Altea and held Princess Elice hostage. However, the prince of Altea, Marth, escaped with several soldiers and fled to Talys, where he trained for two years. Archanea was then captured that same year, with the entire royal family killed, except Nyna, who escaped with the help of the leader of Grust's Sable Order, Camus. Marth started to build an army while Aurelis held the other countries off until the two armies met up and joined forces in Aurelis. Marth's army, by then known as the Archanean League, proceeded to defeat every kingdom one by one, slaying Gra's king Jiol, defeating Grust after beating Camus, and winning against Macedon by defeating Michalis. After defeating all of the enemy kingdoms one by one, the Archanean League went to Thebe, defeated Gharnef, and recovered the Falchion. Marth ended the war by repeating history by slaying Medeus once again with Falchion.

After the War of Darkness, Nyna was forced to choose a fiancé so he could become emperor of Archanea, and the only two eligible royal men were Marth and the Prince of Aurelis, Hardin. Since she was friends with Marth's lover, Caeda, she proposed to Hardin and he became emperor of Archanea. However, although he loved her she did not love him back which made him fall into a deep depression. Under this depression he was able to fall prey to Gharnef, who had survived by hiding his soul in the Darksphere. Gharnef, disguised as a merchant, gave Hardin the Darksphere, which twisted his soul, and had Hardin's army occupy Grust. The corrupted Hardin appointing General Lang as the leader of Grust since the heirs to the throne joined the Rebel Army with General Lorenz. When Marth learned of all of this, a war between Altea and Archanea known as the "War of Heroes" began.

The War of Heroes

In order to defeat Gharnef again, Marth and his army had to gain all of the Starsphere Shards that had scattered across the continent after Gotoh created the spell Starlight with the Starsphere to defeat Gharnef before. He did this while being branded a traitor by Hardin's army. After retrieving the Shards, Marth defeated Hardin, but being forced to kill him in the process. Eventually, Gharnef resurrected Medeus by using Nyna, Elice, princess of Macedon Maria, and noblewoman Lena, only for Marth's army to save the maidens and defeat Gharnef and Medeus again.

The sheer brutality of this second war had taken a considerable toll on its survivors, as most of Archanea's noble houses were left in ruins. Following her rescue, Nyna ceded rule of the Holy Kingdom to Marth before vanishing. Hardin's brother, the King of Aurelis, having no heirs, declared Marth his successor. Likewise, all of the other surviving monarchs followed suit, entrusting the future of their lands to Marth as a result of his valorous leadership in the war. As a result, Marth unified the nations into the Archanean Alliance, and ruled as its first king, later being known as "The Hero-King".

By the time of Fire Emblem Awakening, the continent has had its name changed from Archanea to Ylisse, after the halidom whose royal family can trace its lineage back to the great king Marth. Its ruler at the beginning of the game is Emmeryn, and it is the site of the conflict between three countries that now make up the land, the alliance of Ylisse and Ferox versus the kingdom of Plegia. It is later then invaded by the Valm who seek to conquest the region to expand their empire to an even greater size.

Archanea is the largest nation on the continent. Princess Nyna is the ruling figurehead, but she remains in exile since Dolhr's invasion. Archanea is a prosperous nation, made up of a variety of merchant towns.

Altea is an island kingdom at the center of the continent. Marth hails as prince from here, upon exile ever since Gra's betrayal. The hero Anri also hailed from this kingdom.

Dolhr is the home of the dragonkin and their tyrant ruler, Medeus. Under his rule, it had vast military ambition and once conquered the entire continent under the name of the Dolunian Empire. It wasn't until Anri slew Medeus using the legendary blade Falchion that peace was returned to Archanea.

Gra closely neighbors Altea, and was considered an ally until their sudden betrayal upon Medeus' return. Altea and Gra are closely connected due to Gra being created over an inheritance issue between Anri's two brothers, leading the Altean and Gra royal families to be intertwined.

Talys is a remote island nation to the east of Archanea. It is a peaceful nation, with a small army merely existent to defend against pirate raids. It is the home of Princess Caeda.

Macedon neighbors Dolhr, and has allied with them upon Medeus's return. Princess Minerva hails from this nation and is famed for her Pegasus Knights known as the Whitewings and Prince Michalis' Dragon Knights, the Dragoons.

Aurelis is a kingdom within the plains. Hardin, the king's brother, leads its knights to fight back against Dolhr and its allies, until his corruption, leading Aurelis to be one of the biggest enemy nations in Mystery of the Emblem.

Khadein is situated in the middle of a vast desert and is home to scholars of magic. It was founded and is currently ruled by Gotoh, but during the wars It was ruled by Gharnef, the Dark Pontifex.

Grust is a militant kingdom famous for its Sable Order of knights, led by Camus the Sable. Its king, Ludwik feared the Shadow Dragon's might and so joined forces with him.

Pyrathi is an isolationist kingdom whose leader, Mannu, is rumored to be a manakete.

Thabes is a kingdom that was lost to time, along with its civilization and its treasures. It dwells in the vast desert region of Mamorthod. It is said that Naga's final resting place was at Thabes. It is also the birthplace of Grima. 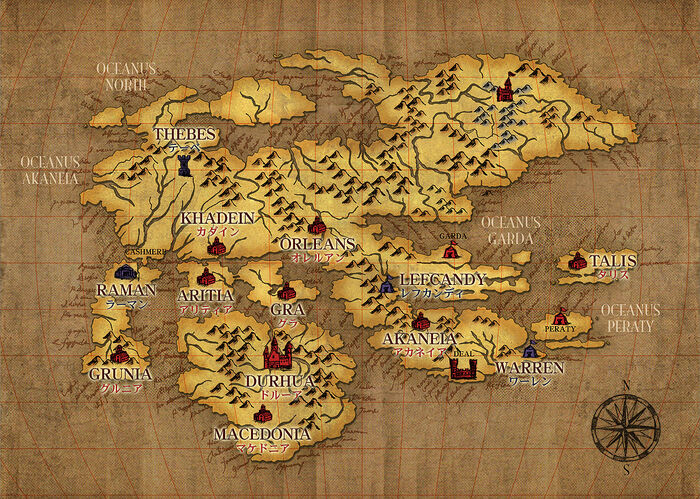 Acarnania (Greek: Ακαρνανία) is a region of west-central Greece that lies along the Ionian Sea, west of Aetolia, with the Achelous River for a boundary, and north of the gulf of Calydon, which is the entrance to the Gulf of Corinth. 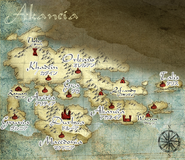 Archanea Map from Shadow Dragon and the Blade of Light.

Archanea Map from Mystery of the Emblem.

Archanea Map from Shadow Dragon and New Mystery of the Emblem.

Archanea Map as it appears in the Fire Emblem anime in the Opening Sequence.