Arcthunder (ギガサンダー Giga sandā) is a Thunder magic tome from Fire Emblem: Radiant Dawn and Fire Emblem Awakening. When cast, multiple bolts of lightning will rain down from the sky to strike a selected enemy target. A fairly potent tome, Arcthunder, like all other Thunder Magic spells in Radiant Dawn, is effective against Dragon tribe Laguz, and can only be purchased in Parts 1, 3 and 4 of the game.

This tome makes yet another appearance in Awakening, where it possesses a higher Might and a greater number of uses in exchange for lower Worth and the removal of its potency against Dragons and Dracoknights.

Arcthunder appears as the third stage of Robin's Standard B move in Super Smash Brothers for the Wii U and 3DS. The third stage is illustrated with a red aura. When fired, the attack manifests as a large orb of electricity that slightly hovers in front of Robin before traveling straight forward. If it makes contact with an enemy, it will stun them in place for a few seconds before launching them. 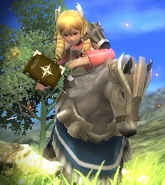 Maribelle wielding the tome of Arcthunder in Awakening.