As in the Link Arena, only classes that can fight may enter the arena. When you enter a unit into the arena (except for in Genealogy of the Holy War), you are given the option to wager an amount of gold. If you accept, your unit will do battle with an opponent. If your unit wins, you win even money on your wager, and gain some experience.

The battle that takes place in an Arena works the same way as a battle in the field, except that instead of stopping once each unit has made their attacks, this process repeats until one unit is defeated, you retreat, or both units find themselves unable to damage the other. After each repetition, if the B Button is pressed, the battle will end prematurely and you will lose your wager if one was made. This option can be used to pull units out if they are close to death.

To enter the arena in Genealogy of the Holy War, units must enter a castle and then select the arena option from there. A unit can only successfully defeat enemies in the arena up to seven times in a single chapter, and if a character is defeated in the arena they are left with one hit point. Unlike arenas in the rest of the series, the types of opponents faced are preset, so each character will fight their own line of enemies (meaning you cannot do an "Arena Gauntlet"), although having preset enemies makes the process significantly easier and more predictable.

Arenas also appear in Shadow Dragon. However, unlike in the Game Boy Advance games, the arenas in Shadow Dragon have an option to fight in the arena again in the same turn after winning, allowing players to use the arena multiple times in one turn. This option can be extremely risky as the player is not given the chance to heal the unit from the previous fight. The training grounds that can be accessed during battle preparations in New Mystery of the Emblem act similarly to arenas, the differences being that no money is won, the character uses his/her own weapons, is healed between rounds, and their stat gains when leveling up are different, namely (sum of growths/100) stats grow with a chance of one more stat increasing. This allows the player to use training grounds to maximize each unit’s stats much like Bonus Experience from Radiant Dawn.

Arena is available after being built in My Castle in Fire Emblem Fates, but in this game it cannot be used to gain money or experience - rather it follows a completely different set of mechanics. Players can gamble one their resources (miscellaneous resources such as foodstuffs and ores) in a set quantity of one.

Every playable character, excluding logbook units, are capable of participating in the arena during the morning, afternoon, evening, and nighttime hours, provided that they are in a class that is capable of fighting. The Arena Shield, an accessory bought from the Accessory Shop (or gifted by visiting players), will have their user participate in the Arena more often. This effect does not apply to logbook units.

Upon entering the Arena, a random character will be in the Arena, waiting to fight. If that character does not have any supports, or the player visits another player's arena, fights will start in a 1v1 format. If the character does have any supports, the highest support (or first one in their "bonds" if that unit has multiple same Support levels with other units), that character will also arrive and help out in the battle, and a 2v2 format is put in instead, with both sides utilizing Attack Stance.

The player participates in the Arena by gambling a resource they have. The opponent(s) your units face are randomly generated to their strength; for example, an early Jakob or Felicia will initially fight unpromoted units, but as they get stronger, the enemy will also get stronger and be promoted instead. The generated enemies do not have any skills, but they should not be underestimated anyways as the game can produce unusually powerful units (such as Onmyojis with very high magic and able to double your fastest units), or produce durable units that have high strength and defense, but not much damage. All units, player and enemy, are given Iron weapons of their primary weapon style, unless all of their weapon types are E rank, forcing them to use Bronze weapons instead.

In this game, Arena is a form of battle style within History Mode, with a max deployment limit of 2 units, often necessitating a Pair Up. In this form of battle, time is not a gradable thing, allowing players to fight as long as they can.

Battles here are usually a matter of 3 opponents against the two playable units, with the later waves of enemies often bringing in 1 or even 2 backup units when a opposing Hero unit is in critical health. When players with significantly overleveled units replay earlier Arena battles, they cannot KO anyone until the announcement of the wave is announced, and they cannot KO a enemy Hero unit until after their call for help is answered.

The player can forfeit this battle scenario by running out of the opened Arena doors, which close when the game registers that the player has engaged in combat.

Some people have taken to the hobby of "Arena Abuse", one of the most commonly used Sources of Infinite Experience. It's done by sending units into the arena constantly until they are weak, so that they can get healed by staff wielders. If the player did not bring a user who can use staves, then a Vulnerary will work, but not as well. The player constantly heals the fighter up until the Heal staff breaks. Usually, all levels with an Arena have a Shop on the same map. The player takes advantage of this and buys as many Heal (or Mend, if Heal staves are not sold there) staves as they can. Then the abuser can repeat the process.

Since you get money from frequently winning at arenas, and because arena weapons are separate from what the unit has equipped, players can keep doing this until all desired units have reached their maximum level and the abuser has enormous amounts of gold earned from the arenas. The process of arena abusing, without losing any units, is rather difficult and tedious outside of illegitimate exploits.

An "Arena Gauntlet" is when the player constantly uses the arena without healing and does not use any form of "random number generator" abuse. The option that allows players to go continue on to another match in Shadow Dragon makes it easier to do an "Arena Gauntlet" in a single turn, somewhat redeeming turncount, although this can be risky. 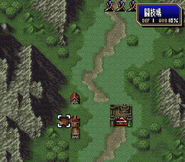 An Arena in Fire Emblem: Thracia 776.

An Arena in Fire Emblem: The Sacred Stones.

Another version of the Arena in Fire Emblem: The Sacred Stones.