Prince of Nordion
King of Agustria

Cavalier (Genealogy of the Holy War)

Robbie Daymond
[view]
“Who of you doesn't recognize this sword? I must warn you the Mystletainn craves blood! So who wants to be its first victim?”
—Ares in Genealogy of the Holy War

Ares is a playable character from Fire Emblem: Genealogy of the Holy War. He is the son of Eldigan and Grahnye, the nephew of Lachesis, and the cousin of Diarmuid and Nanna. Being a major-blooded descendant of Hoðr, he can wield the Demon Sword Mystletainn. In the events of the game, Ares is stationed at Dahna alongside Lene/Laylea, working under Javarro's band of mercenaries.

When Seliph's liberation army passes through the border, Ares leaves to fight with Javarro. Javarro confesses that Bramsel, the lord of Dahna, has imprisoned either Lene, or Laylea, and urges him to forget about her. Ares, enraged, turns against Javarro, despite the latter having raised him after Grahnye's death. In order to save the imprisoned girl, Ares decided to join Seliph's army, albeit reluctantly, as he believes that his father was betrayed by Sigurd. He will later learn of the truth behind his father's death upon meeting Nanna, who explains that Sigurd had not betrayed Eldigan and that the two had always been friends despite how things had eventually turned out.

Ares shows a cold and distant personality at first, wanting revenge on Seliph. However, after talking to Nanna, he sets aside and becomes a kinder person, even training with her. He cares greatly for Lene/Laylea, and only joins Seliph at first to rescue her.

Ares is one of the more powerful characters in the game, which is rather fitting for the son of Eldigan. He starts out with Mystletainn, a formidable weapon that bestows its user with the Critical skill, along with a +20 boost to Skill and a +10 to Resistance. With Adept and Pursuit at his disposal, Ares will attack very frequently, ensuring he will critical often. Very few opponents can survive a critical hit from Mystletainn, and even a normal hit will often one-shot opponents, due to Ares's uncommonly high Strength growth, solid base, and its impressive natural Might. While Ares's Speed growth isn't very high, it still tends to be enough for him to double, given the comparatively low weight of Mystletainn. Vantage also provides him with a solid layer of defense, able to kill melee opponents before they kill him when brought to low health, though Ares is already one of the tougher units when leveled. Ares also boasts unusually good Resistance for a physical unit, exacerbated by Mystletainn, which is a vital trait in the lategame when enemy mages and status staves become a real threat.

One of Ares's best traits is his Cavalier class. In the second generation, the combination of a mount and a Holy Weapon is a very rare one; only Seliph in the lategame, a promoted Arthur with Lewyn as a father, and Altena can mix mobility and raw power in this manner. Ares is simply handed to you with this combination in the second chapter, and in your vanguard of cavalry units, he will usually be your strongest attacker, while Shannan, Febail, and Ced or Coirpre are known to lag behind.

In Chapter 7, Ares may speak to Seliph, but nothing will result of it.

In Chapter 8, after Conote is captured, Nanna may speak to Ares, resulting in her gaining two points of Strength and two points of Defense.

In the Final Chapter, if Nanna is in love with Ares, Nanna may speak to him, and he will gain three points of Defense.

Eldigan's son and heir to Mystletainn. After his parents passed away, he joined up with a mercenary captain called Javarro. Appears in Fire Emblem: Genealogy of the Holy War.

“You disgust me. I hate to say it, but you're going to die.”
—Ares's battle quote versus Javarro in Chapter 7
“T-this cannot be... How could I lose...”
—Ares's death quote

"After its civil war, Agustria was annexed by Grannvale and was under the supervision of a strict and despotic administration. And so, the establishment of a newly united nation was the wish of everyone, and that wish was entrusted to Eldigan the Lionheart’s Royal House of Nordion. The people welcomed Ares’ return to the country with wild enthusiasm, as they saw in Ares the likeness of King Eldigan in his prime. Ares returned to the country along with, among others, his sweetheart [Lover], the knight Diarmuid/Tristan and Nanna/Jeanne. Together with them, he devoted himself with all his strength to the reconstruction of a united Agustria. Before long, under the reign of King Ares, Agustria, as Grannvale’s most influent partner, would know an unprecedented development."

Ares is illustrated in the trading card game with the following cards: 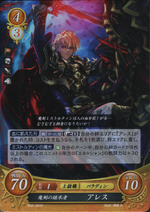 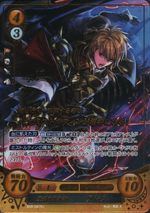 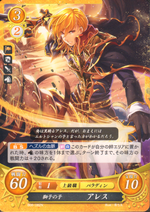 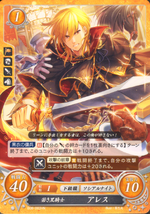 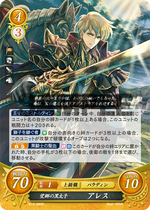 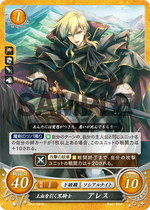 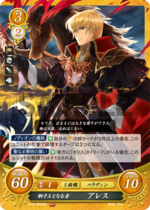 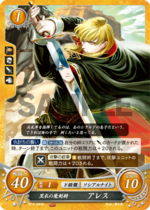 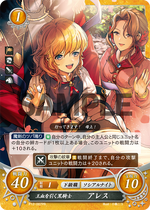 Ares is the Greek god of war also known under the Roman name of Mars.