Kris Zimmerman (Fates)
Sara Cravens (Heroes)
[view]
“I am Arete, queen of Nohr and wife of King Garon.”
—Arete introducing herself in Heroes.

Arete is a boss character in the Revelation route in Fire Emblem Fates. Azura's biological mother and the second wife of King Garon of Nohr, the stepmother of Xander, Camilla, Leo and Elise, and the maternal grandmother of Shigure, Arete is the second queen consort of Nohr and was once the queen of Valla, having had Azura with her first husband, the fallen king of said Kingdom.

Once Valla's queen, Arete was forced to flee alongside her younger sister Mikoto after the insane half of Mikoto's lover, Anankos usurped the previous ruler, who was Arete's husband. Arete and little Azura then arrived in Nohr, where she eventually became King Garon's second wife and his second queen consort after he fell in love with her singing voice. She later gave her life to save Nohr and her daughter, who says she died by openly speaking about Valla despite the Kingdom's curse that kills anyone who talks about it outside its limits, perfectly knowing that it would kill her but it'd still let her pass her knowledge about the land to Azura herself. However, years later, Arete is revived by Anankos without her memories as one of his minions.

She encounters Azura and Corrin the first time they go to Valla, forcing them to leave, but does not reveal her identity to them. Much later, after Azura and Corrin combine the Hoshidan and Nohrian army, Arete serves as the front commander of the Vallite army upon their return to Valla. Azura eventually sees that the mysterious woman they met earlier was her deceased mother.

Arete confronts their army three times, though each time she fights her daughter, memories of her past begins to surface. After Arete is defeated for a third and final time, she remembers her daughter. As her soul is slowly released from Anankos' control, she calls out for her daughter; and despite her companions' warning, Azura approaches her. Arete expresses with pride of Azura's growth since the last time she saw her as a little girl, but her brief time with her daughter ends when she dissolves away, leaving the army to harden their resolve to take down Anankos.

Arete's personality prior to her death and subsequent resurrection is given some insight by both Azura and Cassita. According to Azura's supports with Laslow, Arete was a gifted singer and dancer, with Azura inheriting and being taught by Arete in both these areas. Cassita reminisces about Arete's singing filling the halls of the castle in the past, and Azura mentions that she always smiled while she sang. She also taught Azura several songs during their time in Nohr, including Lost in Thoughts All Alone and a song about the bonds between people. Additionally, Azura inherited her pendant and its power from Arete. According to Cassita, Arete's singing would help pull Garon out of his grief following the death of his first wife, and it would eventually lead to their marriage. Garon loved Arete greatly, and it is commonly assumed that her death led to his change in disposition seen during the events of Fates.

Arete was also shown to be wise and knowledgeable about her homeland, being the main source of Azura's knowledge of Valla and Anankos. In doing so she also demonstrates a self-sacrificial nature, as she gave her daughter this information with the awareness that speaking of Valla outside its borders would kill her. According to Azura, Arete did this to protect both her and Nohr, and in this respect she is similar to her other family members, who all display a willingness to sacrifice themselves for those they love.

By the time Fates occurs, Arete's personality has been altered to better suit Anankos's purposes. Unlike Mikoto and Sumeragi, Arete completely lacks her memories following her resurrection, having no recollection of her daughter or her prior life in Valla and Nohr. Instead, Arete shows complete and utter loyalty to Anankos, believing him to be the rightful ruler of Valla and revering him as being "great" and "almighty". She is obsessed with enforcing Anankos's will and keeping outsiders out of Valla, but she seems content with merely making them leave rather than killing them. Though Arete is oblivious to her relationship with her daughter and grandson, she feels a splitting pain in her skull whenever she sets her eyes on them, showing that her prior memories are repressed to some extent. Following her defeat at the hands of Corrin's army, she regains her memories and expresses pride in how Azura has grown since her death before she fades away.

Requiem's Beauty
The combination of her alluring figure and her songbird voice are said to have entranced royals everywhere from Valla to Nohr. Appears in Fire Emblem Fates.

Azura's mother. Once married to King Garon. Also has strong ties to Valla.

“On behalf of my king, I welcome you to our hidden kingdom.”
—Pre-Battle quote as ???.

“Everything that I do, I do in the name of the great Anankos.”
—Arete's pre-battle quote.

“You seem...stronger than before. I should have accounted for that...”
—Arete's defeat quote.

“I will not allow you to go any farther. If you try, I will kill you.”
—Arete's pre-battle quote.

“Lady Lilith has ordered me to annihilate you...”
—Arete's pre-battle quote.

“To think that outsiders could be so powerful...”
—Arete's defeat quote.

“You will die before ever sullying the almighty King Anankos's presence.”
—Arete's pre-battle quote.

Arete is illustrated in the trading card game Fire Emblem Cipher with the following cards: 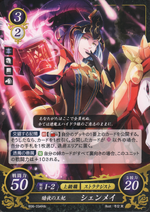 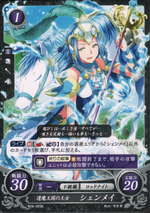 "Arete", in Greek, means either "excellence" or "moral virtue". In its earliest appearance in Greek, this notion of excellence was ultimately bound up with the notion of the fulfillment of purpose or function: the act of living up to one's full potential. This name may be an allusion to Queen Arete's knowledge about Valla, which she passed to Azura. It is also similar in meaning to Mikoto. Her name means “earring” in Spanish.

In Greek mythology Arete was the much-loved wife and queen of King Alcinous of Scheria. Both were descendants of the sea god, Poseidon, which may be a possible allusion to Azura, Shigure, and Anankos's water motif.

Her Japanese name, Shenmei, may come from the Chinese 審美 shěnměi, meaning "appreciating the arts" or "aesthetic appreciation."