Dragon Master
[view]
“They reached Grutia, did they... Alright, we'll employ the 'Three-Headed Dragon' assault. All reserve battalions to the battlefront! This is our last chance. This battle shall decide the fate of Thracia!”
—Arion

Arion is an enemy character from Fire Emblem: Genealogy of the Holy War who makes a minor appearance in Fire Emblem: Thracia 776. He is the son of King Travant of Thracia. He is also a direct descendant of Crusader Dáinn who inherited the ability to wield Gungnir. Despite being the fiancé of Linoan, he appears to be in love with his adopted sister and distant relative, Altena.

Arion makes his first appearance when he and Travant are discussing their ambitions of bringing prosperity to Thracia. In Chapter 8, he advises Altena to obey Travant's orders, rather than argue against them. After her failure to seize Manster, he pleads for Travant to forgive Altena, claiming that she is a child who is frightened by actual warfare.

When Altena attempts to kill Travant upon discovering the truth about her heritage, Arion knocks her out in order to trick his father into thinking that she is dead. After Travant's death at the hands of Seliph's army, Arion advises Altena to reunite with her younger brother, Leif, and reminds her that they will be enemies when they meet again. At the end of Chapter 9, he fights against Seliph's army and ends up defeated. Afterwards, he is taken by Julius, who brings him to Grannvale.

In Thracia 776, it is revealed that Arion sent Dean to Tahra so that he could protect Linoan in his place. He also asks Altena to deliver the Dragonpike to Dean so that he could more easily defend Linoan. He is first seen during Thracia's attack on Tahra at the end of Chapter 14. Wishing to spare civilian lives, he meets with Linoan, who agrees to surrender Tahra to Thracia. However, she refuses to accept his offer to protect her and instead escapes with Leif. In his last scene, Arion openly wonders whether or not Leif will be an enemy to Thracia and expresses his desire to meet him.

It is revealed in Thracia 776 that Arion suffered wounds as a result of the war and was escorted back to Thracia by Dean after it ended.

Arion is very loyal to Travant and would not hesitate to carry out his will. He often makes attempts to excuse Altena's actions to Travant, who claims that he is coddling her. He seems to be aware of Altena's true heritage before she discovers it, since Travant makes comments about it in front of him. After Travant's death, he decides to oppose the Liberation Army because of Travant's dying words. Altena interprets Arion's choice as a result of him as being too focused on his ego to tell right from wrong, while others believe it to be pride.

*Dropped when defeated (Chapter 9 only).

Arion is fought twice, once in Chapter 9, and once in the Final Chapter. He possesses the same stats in both instances, although he comes with a Prayer Ring, which will be dropped upon his defeat in the former chapter.

In Chapter 9, Arion appears near Thracia Castle with a large squad of strong Dragon Knights wielding Sleep Swords and Slim Lances surrounding him. His Attack and Defense stats are sky-high, and he comes with the Holy Lance Gungnir and 5-star leadership. Furthermore, he possesses the Pursuit and Continue skills, allowing him to attack more than once in a single round, alongside the Awareness skill, which nullifies all other special skills and prevents Critical Hits (such as from bows). It is thus recommended to attack him with magic from two spaces away, preferably with the Forseti user.

In the Final Chapter, he appears with a small squad of five Dragon Knights with Brave Lances over the lake in the southwest corner of the map, flying west directly towards Chalphy. If the player opts to defeat him, it will be the same as the last encounter, with the exception that he lacks the Prayer Ring, and the player's army should be stronger by then. If the player chooses not to defeat him, have Altena in a position just outside the range of the Dragon Knight in front of Arion before his squad approaches Chalphy. By doing so, the player will have two different plans to undertake:

After making Arion and his squad neutral, the player may choose to either do nothing with Altena, or have her lead his squad to combat Julius and the Deadlords. Note that this may risk Arion getting killed, which negatively impacts the ending, but not the player's combat ranking.

Arion is illustrated in the trading card game with the following cards: 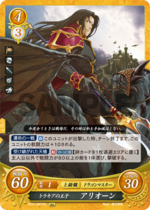 Arion is a divine horse who is the son of the Greek gods Poseidon and Demeter who was known for being the mount of Adrastus, the King of Argos. Because of his divine speed, he saved his master from dying in the war of the Seven against Thebes by spiriting him away from the battlefield.

The name Arion also belongs to a Greek poet, who is most well known for the myth where he was kidnapped by pirates and then subsequently rescued by dolphins from his captors.

Arion, as he appears in the Nea Fuyuki manga adaptation.

Arion, as he appears in the first series of the TCG as a Level 1 Dragon Master.

Arion, as he appears in the third series of the TCG as a Level 10 Dragon Master.

Arion, as he appears in the Promotional series of the TCG as a Level 15 Dragon Master.

Arion as a Dragonmaster in Fire Emblem 0 (Cipher).

Arion's portrait in Genealogy of the Holy War.