“Ha ha, don't be ridiculous. What's wrong with wanting to know your fellow soldiers? I may still be new, but this is my seventeenth battle. I've seen hundreds of my comrades fall in battle, but I remember all of their names. They were all my precious companions. But fine, if you're that opposed to it, I won't pry. It's just one less name that I have to memorize.”
—Arkis, in a conversation with Estelle

Arkis (アーキス Ākisu) is a playable character from TearRing Saga: Utna Heroes Saga. He is one of the knights of Razelia accompanying Runan. He is also the arranged fiancé of Rina, and the partner of her brother, Kreiss.

When Razelia falls to the reborn Zoa Empire, Arkis escapes alongside Runan and several of the other knights. Early in the game, he meets Estelle and makes an offer to become her bodyguard, which she refuses to accept. In a conversation with Kreiss, he doubts Runan's cause out of concern for Rina, who stayed behind in Razelia. If both he and Kreiss are sent with Holmes's army after the first route split, they can meet Leteena at Verge.

In the event that the player goes to Map 26B, Arkis betrays Runan in order to protect Rina, whom Rentzenheimer uses as a hostage against him. He is also forced to disguise himself as dark knight so that his former allies would not recognize him on the battlefield. If Rina speaks to him after her rescue, Arkis defects back to Runan's army. At the end of the chapter, Eugen summons Arkis to be receive the punishment of a traitor. However, Runan and Eugen decide to forgive him once Rina explains the reason for his betrayal and claims responsibility for it.

In the ending, Arkis and Kreiss are assigned to be the bodyguards of Enteh. If the player went to Map 26A, he rejects Rina, causing her to become very upset. However, if Map 26B was visited instead, he entrusts Rina to his uncle's care.

Unlike Kreiss, Arkis is an easygoing and cheerful man who is flirtatious towards the majority of women whom he meets. He values his loved ones above his loyalty to Razelia and therefore is willing to sacrifice civilians to save them. He considers all of his comrades to be precious companions and honors them by remembering their names. Although he deeply cares about Rina, he does not love her romantically, with one of his reasons being her youth. He also has a tendency to become rather embarrassed whenever Rina is kind to him.

Automatically from the start of Map 1. If the player goes to Map 26B, he leaves the player's army and appears as an enemy dark knight. To re-recruit him, have Rina speak to him after opening her cell.

Of the two first Cavaliers, Arkis is the one who focuses more on Speed and Luck, with barely average growths in Strength, Skill and Defense hampering his combat ability. Arkis's promotion to Commando Knight allows him to fight just as well on foot as he can on horseback. However, other Cavaliers can hit harder and faster. In the long-term, he is an average unit; not poor, but not the best choice either.

Arkis disguised as a Dark Soldier. 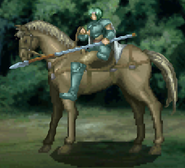 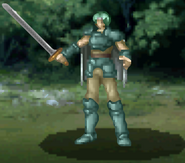 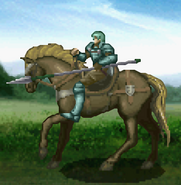 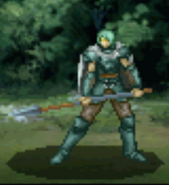 Arkis' battle model as a Commando Knight with a lance (dismounted). 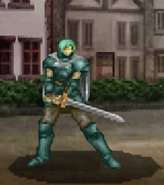