Student at Khadein School of Magic

Mage
[view]
“I became master's student before you, and I was stronger than you. Yet, he gave Excalibur, which should have been mine, to you. Why, Merric? Is it because you're a noble of Altea? I was so angry. I believed I was going to be master's successor...”
—Arlen to Merric

Arlen is an enemy and playable character in Fire Emblem: Mystery of the Emblem and Fire Emblem: New Mystery of the Emblem. He is leader of the mage army of Khadein. He is Wendell's first disciple, and Merric's bitter rival. Having aligned himself with Archanea, he uses the war with Altea as an excuse to attack Merric. He confronts Merric, revealing that the reason Arlen dislikes the young mage was because Master Wendell chose Merric to receive Excalibur instead, due to Arlen's lack of a caring heart. He joins Marth's side after being shamed by Wendell, who tells him that he's following Gharnef's path by letting his jealousy overcome him. After the war, he became a High Bishop and worked tirelessly to restore the city of magic.

Arlen was a very talented mage at the School of Khadein, enough to be Wendell's first apprentice. However, he was arrogant and uncaring, and his personality made other students back away from him, although he didn't care much. One point during his life, he was approached by Merric, who wanted to become his friend. Arlen was constantly asked by Merric to be his friend, but he just ignored all of his attempts. In time, Arlen started to like Merric's company and consider him a friend. However, his newfound like was soon shattered when Wendell entrusted the tome Excalibur to Merric, considering Arlen not worthy of wielding it, because of his ruthlessness. Arlen grow to despise both Merric and his former master.

Taking advantage of Wendell's absence, Arlen took control of Khadein and prepared an attack against the Altean army. Before attacking, however, Arlen challenged Merric to a duel out of envy, claiming that only one will leave alive. Merric refused to fight him, stalling enough time for Wendell to arrive and talk to Arlen, convincing him that his hatred would have turned him like Gharnef. Realizing his mistakes, Arlen begs for forgiveness and joins Marth's army to atone.

After the war, Arlen became the pontifex of Khadein and worked hard to restore the city, also earning the respect of many students.

Arlen has very lopsided stats for a magic user, but he is not a bad unit when trained. He has low luck, but good skill and speed. He can get very high hp; he can also get good defense, but this is compensated with unusually low resistance, meaning he should be attacking physical attackers instead of magic users.

Thunder Sage
"As a pontifex of Khadein, Arlen strived to restore the City of Magic. His strict personality earned him the respect of his students."

Arlen is illustrated in the trading card game Fire Emblem Cipher with the following cards: 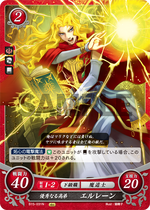 Official artwork of Arlen from The Complete.

Artwork of Arlen in Fire Emblem 0 (Cipher) by Nekobayashi.

Arlen, as he appears in the sixth series of the TCG as a Level 10 Mage.

Arlen, as a in the sixth series of the TCG as a Level 20 Bishop.

Arlen as a Mage in Fire Emblem 0 (Cipher).

Arlen's portrait in Mystery of the Emblem.