Varies
[view]
“Once you have gained such power… Your life will not end in a comfortable bed. You will die on the battlefield. In the savage garden of war’s bloody delights.”
—Durban warning Hector of Armads' curse.

Armads (アルマーズ Arumāzu) the Thunder Axe (天雷の斧, Tenrai no Ono lit. Axe of Heavenly Thunder) is one of eight Legendary Weapons of Elibe, and is the most formidable Axe in the Elibe Series of Fire Emblem. Forged during the Scouring for the purpose of slaying Manaketes, Armads was first wielded by Durban the Berserker, an individual who later founded the Western Isles.

Armads was forged during the Scouring, and was wielded by Durban. Armads was later sealed in a cave located on the Western Isles following the conclusion of the Scouring.

During the events of The Blazing Blade, the seal imposed on the cave is broken by Bramimond, granting Hector passage into its depths to retrieve Armads. After being subjected to a gruelling trial, Hector succeeds in earning the right to claim the axe. As he attempts to do so, the spirit of Durban emerges, warning him that in doing so, he will not die "peacefully, but in battle". Brashly asserting that he is willing to go to any lengths for Eliwood's sake, Hector assumes ownership of Armads and wields it to end Nergal's influence on Elibe.

Twenty years later, as depicted in The Binding Blade, Durban's warning proves to be true, as Hector, now the leader of the Lycian League, is ultimately killed by wounds inflicted by two of Bern’s Wyvern Generals when King Zephiel ambushed the Lycian army at Araphen in Chapter 3. At the time, however, Armads is not in Hector's possession, it having been returned to the Western Isles some two decades previously. Subsequent to this tragedy, Roy's army can recover it from its resting place in the isles in Chapter 12x. Any unit with an S-level proficiency in axes can wield the Armads in this game, although it is never specified if any of the wielders will follow after Hector's example and die violently.

The Armads returns in Awakening, where it noticeably assumes a skeletal appearance, with what appears to be an eye in its "head" and the structure of a hand clutching a red orb at its base.

The name "Armads" comes from Almace, the legendary sword of Archbishop Turpin, one of Charlemagne's Twelve Peers. Durban is also an alteration of the name Turpin, making the pairing of Durban and Armads fit in nicely with the legend.

Armads, as it appears in the logo for The Blazing Blade.

Animation of Hector attacking with Armads from The Blazing Blade. 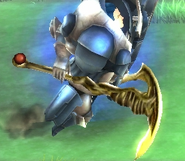