Axe
[view]
The Armor Axe (アクスアーマー Akusu āmā) is a variation of the Armor Knight introduced in Fire Emblem: Genealogy of the Holy War. As their name implies, they exclusively wield axes.

History in the series[edit | edit source]

The Axe Armor debuts in Fire Emblem: Genealogy of the Holy War alongside the Sword Armor and Bow Armor classes. No Axe Armors within the game were recruitable, with only Sword Armors being available to the player's army.

Armor Axes returned in the direct follow up Fire Emblem: Thracia 776 where they were playable through the recruitable Dalsin. Notably Armor Axes were the most common armor variant among the enemy after the regular Lance variation.

In Fire Emblem: The Blazing Blade, the main character, Hector's version of the lord class draws inspiration from the Armored Axe class, however the class doesn't technically gain armored status until after promotion to Great Lord.

The Armor Axe wouldn't return to the series until Fire Emblem: Radiant Dawn alongside the other Armor variants, where they promoted to the unique Axe General class and onward to their own version of the third tier Marshall class that focused on Axes.

The mobile game, Fire Emblem Heroes returns Armor Axes as a class. Like Radiant Dawn, they return alongside all armor variations but bows. The class is identified by having a green palette. The class is now identified by the english name, Axe Knight. While technically no playable characters have classes, several characters like Hector have armored unit status and exclusively use axes.

In its first two appearances, Armor Axes have the same stats as the other Armor variations, and should be treated similarly.

In Radiant Dawn, the Armor axe class line has slightly higher skill and strength but lower speed then the other armor class lines. Upon promotion to Axe General, they gain the use of B Rank swords.

In Thracia 776 Armor Axe promotes to General, and it is assumed the same applies to Genealogy of the Holy War. 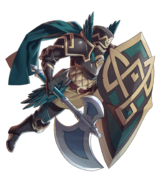 Dalsin, An Axe Armor in FE5

Map sprite of an ally axe armor in FE4

Map animation of an enemy Armor Axe in FE4