Shove(FE10)
[view]
The Armor Sword (ソードアーマー Sōdo āmā) is a variation of the Armor Knight introduced in Fire Emblem: Genealogy of the Holy War. As their name implies, they exclusively wield swords.

While the class did not appear in the first game, the regular knight class unit had the ability to use swords alongside lances.

The Armor Sword debuts in Fire Emblem: Genealogy of the Holy War alongside the Axe Armor and Bow Armor classes. The sole playable representative of the armored line, Arden was a Sword Armor.

Armor returned in the direct follow up Fire Emblem: Thracia 776, though they were no longer a playable class.

Armor Swords wouldn't return to the series until Fire Emblem: Radiant Dawn alongside the other Armor variants barring Bow Armor, where they promoted to the unique Sword General class and onward to their own version of the third tier Marshall class that focused on Sword. They are the only armored class to have a female representative.

Fire Emblem Heroes features Sword Armors as a class in the game. Like Radiant Dawn, they appear alongside the regular lance and axe variations. The class is identified by having a red palette. The class is known identified by the english name, Sword Knight. While technically no usable characters within Heroes have classes, playable characters who were Armor Swords in their original game like Arden retain the traits of the class including Armored status.

In its first two appearances, Armor Swords have the same stats as the other Armor variations, and should be treated similarly. In Genealogy of the Holy War, the low weight of swords meant sword armors had an advantage in speed.

In Genealogy of the Holy War, Armor Sword promotes to General.

In Thracia 776 Armor Axe promotes to General so it can be assumed the same applies to Sword Armors as several enemy generals have Sword as their weapon rank.

In Radiant Dawn, Armor Sword promotes to Sword General which learns to use B rank Lances. 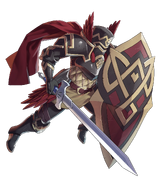 Arden, a Sword armor in FE4 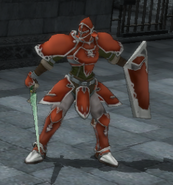 Djur, an Armor Sword in FE10

Map sprite of a sword armor in FE4

Map sprite of Meg, a female Sword armor in Fe10