Not to be confused with Aran.

Paladin
[view]
“Sire, my name is Arran. Once I was a captain to many knights... but, things changed, and I came to live here in this village. If you need warriors for the coming struggle, I would be honored to fight. Unfortunately, there has always been bad blood between this village and our neighbors. No doubt they closed their gates to you as soon as they saw you come here. You won't be able to recruit the hero Samson now, I'm afraid”
—Arran in Shadow Dragon

Arran is a playable character in Fire Emblem: Shadow Dragon and the Blade of Light, Fire Emblem: Mystery of the Emblem, and its remakes.

Arran is a former knight captain living in Altea who went into hiding after Dolhr's take over. He can join Marth, but recruiting him bars the option of recruiting Samson, since he hides in a village which is constantly at conflict with its neighboring village. Nevertheless, even if he's not recruited, in the end of Marth's first quest, Arran was able to return to the ranks of the Altean Knights.

In Fire Emblem: Mystery of the Emblem, Arran took over Jagen's position as the protector of the new recruits in battle. However, he was struck with sickness, which makes his fighting prowess not as good as it was in the previous war, explaining his poor growth rates. Despite his illness, he insists on fighting, hoping to die in battle. At the end of the war, he finally succumbs to his illness and dies.

In Fire Emblem: New Mystery of the Emblem, it is revealed in a support conversation with Kris that Arran was once a knight of another kingdom and slaughtered a group of peasants, revolting due to a bad winter harvest, at the request of his former lord. Arran was never able to forgive himself, and left the services of his former country, wandering in search of what being a knight truly means. In joining Marth's army, he had found his purpose, and resolved to fight in the War of Heroes until the end of his life; sacrificing himself for the sake of his honour as a knight.

Arran is recruited from the left village in Chapter 16. Recruiting Arran will result in the player not being able to recruit the Hero Samson from the neighbouring village. A thief heads towards the two villages at the beginning of the level and must be intercepted in order to prevent the villages from being destroyed.

Both Samson and Arran are stat-wise even. They are essentially meant to replaced units that have fallen behind experience-wise or died. Arran should be the player's choice if player is lacking a useable Cavalier/Paladin type unit.

In Book 1, Arran's growth rates are respectable, making him a decent addition to a squad. However, due to the nature of the stat engine in FE3, Arran is at a disadvantage due to starting as a promoted Paladin compared to leveled up Cavaliers such as Cain or Abel. Arran starts with an Iron Lance and a Silver Sword, meaning it may be wise to dismount him or give him another weapon before sending him into combat.

In Book 2, Arran replaces Jagen in his character archetype. He starts as a promoted Paladin, more powerful than a player's other starting units but is unlikely to improve as he levels up. Just like Jagen, Arran's base stats and high movement is useful for the earlier chapters, particularly when weakening tough enemies or chasing down Thieves.

It is possible to improve his stats with Star Orb fragments but generally, most other Cavaliers and Paladins such as Rody or Sirius will overtake him.

Arran is far from unusable, but at his joining time, he is almost certainly outclassed by other members of the player's army. His stats are unimpressive across the board, especially for a level 10 prepromote, and his growths, though surprisingly not terrible, do not go a long way to fix them. He does have B-rank lances and prepromote reclassing to work with, enabling him to wield a Ridersbane or gain flight, but these were tricks Jagen could perform in Chapter 5, to say nothing of what can be performed by raised units like Caeda, Abel, and Hardin, or even some other prepromotes like Minerva. This tends to make him a filler unit at most.

Arran, unsurprisingly, serves as a counterpart to Jagen in the role of an early-game crutch. His growths are terrible, but he has a number of very helpful parameters: namely, his high weapon ranks and base stats, and his status as a promoted unit. His Silver Lance gives him some of the best attacking power of any early unit, coupled with rather high Strength and Defense. More interestingly, he can be reclassed, which substantially improves his versatility; some notable picks include Swordmaster, which enables him to double nearly anything in the early game, Dracoknight, which allows him to maintain his lance rank and adds flight to the equation, and General, which also lets him keep his lances while sustaining phenomenal punishment. He does not trivialize the early chapters by any means, but he is still noticeably stronger than most other units, and should be one of your chief picks for a significant period.

Arran became captain of Altea’s knights. His efforts helped many a town rise from the ashes after the war.

"Arran died of illness shortly after the war."

Arran is illustrated in the trading card game Fire Emblem Cipher with the following cards: 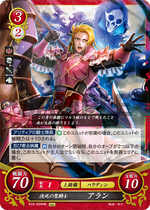 Artwork of Arran from the TCG.

Arran, as he appears in the fifth series of the TCG as a Level 10 Paladin.

Arran as a Paladin in Fire Emblem 0 (Cipher).

Arran's portrait in Shadow Dragon and the Blade of Light.

Arran's portrait in Mystery of the Emblem.