∞
[view]
Arthur's Axe (ハロルドの雄斧 Harurudo no Eipu, lit. Harold's Heroic Axe) is an Axe that is introduced in Fire Emblem Fates. Eponymously named after Arthur, Arthur's Axe is a weapon of decent Might and can only be wielded by male units. When equipped, Arthur's Axe boosts its wielder's Defense by a small amount. Its stats fall somewhere between those of the Iron Axe and Steel Axe in terms of chance to hit and might.

Arthur's Axe is a semi-common random item found in My Castle. It is also rewarded upon gaining 50 battle points from fighting in other castles. 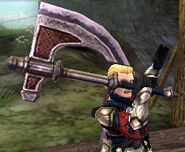