Arthur (Genealogy of the Holy War)

For the Fates character, see here.

Joe Mucciolo
[view]
“Well, my mother fought with the liberation army. After the war we all fled to Silesse. But my mother and baby sister were taken from me, and this pendant is all I have left of her. I found out just recently that it was King Bloom who took them from me. I also found out that my mother had passed away but that my sister was still alive! YOU are my sister! I've come all the way from Silesse for you!”
—Arthur, talking to Tine in her recruitment conversation

Arthur is a playable character from Fire Emblem: Genealogy of the Holy War. He is the son of Tailtiu and the brother of Tine.

His substitute character is Amid, who is incidentally his cousin.

Separated from his mother and sister from a young age, Arthur perpetually grew up in Silesse alone, mastering the art of Wind Magic. He later meets and travels with Fee to search for Tine, who at the time is in Ulster, which leads to the events of Chapter 6. He initially holds a grudge towards his uncle, Bloom, for wrenching his family away from him, but later develops a deep hatred for his aunt, Hilda, as well, as he learns from Tine that she is directly responsible for inflicting the most amount of pain, abuse, and suffering to his mother and sister.

Arthur seems to be rude and harsh on the outside, but is, in actuality, a kind and sensitive individual on the inside, shown in a battle conversation with Fee. Arthur is also cool-headed, logical and sharp in his responses to quips made towards him by Fee.

Arthur's vulnerable side is revealed upon his learning of his mother Tailtiu's tragic fate and the suffering his surviving sister Tine endured. This results in him being concerned, and protective over Tine, as he resolves to never be separated from her ever again.

Arthur is one of the characters most dependent on his father. Due to his nature as a magic unit who natively lacks the Pursuit skill, but also joins early and possesses Wrath, he can hugely vary in his playstyle depending on his parentage. In all incarnations, however, he will have the advantages of a mount upon promotion and rather high damage if he can activate Wrath, which enables him to clear the arena fairly easily and reach his promotion quickly. He also has exceptional Skill due to his Thrud blood, making him very accurate. His base Magic is not very high, meaning he prefers fathers that can provide him with a good Magic growth or synergistic skills.

The best paring for Arthur is Lewyn, as Arthur will inherit Forseti from the start of the game and will be a consistent powerhouse for most of the second generation thanks to Forseti's natural power and his high Speed growth. This makes Arthur the first character in the second generation to join with a Holy Weapon, placing a massive amount of power in the player's hands at a very early stage. He is very effective against two Thunder-wielding bosses in chapter 7 who are otherwise very difficult, Ishtore and Bloom. Consequently, it is common in playthroughs prioritizing speed and efficiency. While Arthur will lack Pursuit and will not double as consistently, he still will be one of the most solid second-generation characters. A Pursuit Ring should be considered, but is ultimately optional: the Forseti's boosts to Skill and Speed will allow him to trigger the otherwise unreliable Adept and Critical skills more often. While this is Arthur's most powerful pairing, it can be somewhat tricky to obtain, and Ced, though joining later and with less mobility, is the better combatant of the two. It will also make Tine weaker - though she can inherit Elwind and later obtain Tornado, her combat power certainly suffers without Pursuit and without any reliable way to trigger Adept or Critical.

If Lewyn is off the table, the next-best father for Arthur is Azelle. Instead of the raw power of Forseti, Arthur instead gains Pursuit, which turns him into a reliable damage-dealer who can one-round or two-round most opponents. With Fjalar blood, Arthur sports a hefty 50% Magic growth, giving him good future prospects, and his Speed becomes very high. It will also allow him to inherit Azelle's tomes, including Elfire, helping him out in the early game - while Fire Tomes have high weight, Arthur should have enough Speed to still Pursue. Pursuit and Wrath is an excellent combination, as it means that if Arthur can activate Wrath, only the rare Nihil-users have even a hope of survival. The pairing is easy to obtain, as Azelle is in fairly low demand as a father, and results in an Arthur that is, effectively, a significantly better version of Azelle; not a spectacular unit, but an effective one.

If dipping into non-magical fathers, a common choice is one with Vantage, especially Lex (who further adds Paragon to the mix). This is due to the interaction between Vantage and Wrath, since the two skills activate simultaneously: not only will he always Critical when at reduced health, but he will always attack first, potentially letting him wipe out the opponent before they can even attack him, turning him into an effective cleaner capable of wiping out large groups of enemies on enemy phase. However, this runs into some problems - both Lex and Arden as fathers would largely tank his Magic growth. Even passing down a Magic Ring, the meager Wind tome just isn't enough to one-shot a significant portion of the game's enemies, even with Wrath and Vantage both triggered. In order to fully take advantage of this combo, let Arthur defeat Ishtore. Once he Promotes, the mighty Thoron tome boasts 20 mt, +5 from the Magic Ring, and around 13-14 Magic, meaning 76-78 base power on one his Critical hits. For this reason, Lex is a far more useful father thanks to his Paragon skill to push Arthur towards that promotion. Further, Lex grants less Strength growth than Arden, but more Defense, Skill, and Luck, which are all more important than Strength for both Arthur and Tine. Tine also will rely heavily on Paragon, considering how much later she joins your army and at such a low level compared to the rest of your units.

Claud is the last significant option, and offers the least of the magic-oriented fathers: he possesses no skills, and Arthur cannot use the staves that are Claud's selling point. Claud is effectively a worse version of Azelle, lacking Pursuit and the ability to pass down tomes above C-rank. On the other hand, Claud is also the only father who passes down a significant Resistance growth, and a good one in Luck as well, giving Arthur the ability to tank or dodge magic fairly effectively.

In Chapter 6, Arthur may speak to Seliph, but nothing will result of it.

In Chapter 7, Arthur can recruit Tine by speaking to her.

In Chapter 8, Arthur may speak to Fee, and she will gain three points of HP and 100 love points with him.

In the Final Chapter, if neither Arthur nor Tine has a lover, he may speak to her, and she will gain one point of luck.

In the Final Chapter, after Friege is captured, if Arthur and Fee are lovers, she may speak to him, and he will gain three points of Skill (though he has most likely already capped his Skill at this point).

Furious Mage
Raised alone in Silesse, separated from his sister and mother at a young age, he harbors resentment toward House Friege. Appears in Fire Emblem: Genealogy of the Holy War.. 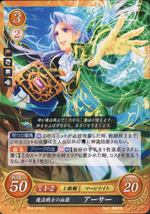 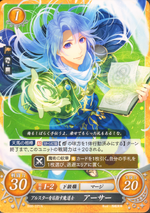 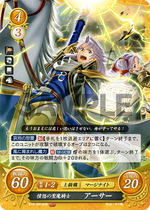 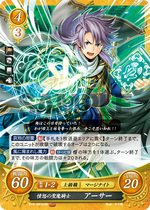 Arthur was a mythical king of England who wielded the Excalibur and was aided by his Knights of the Round Table, as well as Merlin and his wife Guinivere. He met a morbid end, due to wounds suffered from his nephew/son Mordred.