Adin Rudd
[view]
“Please allow me to deal with this. Evil shade! May the blessed light drive you from this land!”
—Artur attacking a Mogall

Artur is a playable character from Fire Emblem: The Sacred Stones.

Artur is a monk from Renais, ordered to help destroy the monsters plaguing the land. He is simple, straightforward, and uncompromisingly pious. When he was a child, he lost his only toy and a monk helped him search for it an entire afternoon, which made him to choose to become a monk.

He is a childhood friend of the mage Lute, who constantly spies on him, a hobby she names 'Monk Watching'. He finds Lute both witty and amusing in addition to peculiar and irrevocably strange. Artur falls quickly in love with Lute over the course of their support conversations, evident once they reach a B level support. Lute one time tried to help Artur confront his fear of spiders by unleashing dozens in his room which Artur always considered a prank until Lute later revealed her intentions, which caused him to look at it as a rare and touching sign of affection from her.

The dancer Tethys finds him a handsome boy, as revealed in their support conversations, though she is more interested in his beauty secrets than him.

*7 in the Japanese version

**9 in the Japanese version

Artur is a very helpful unit throughout the game. He joins at the start of chapter 4, unlike Lute who joins at the end. His base stats are just enough to double and inflict heavy damage on the monsters in that chapter, which will allow him to earn a large amount of experience and level ups, giving him an edge above his competition. His stats are very recognizable as a glass cannon, with very high Magic and Skill and good Speed, but very little HP, Luck, and Defense that allow physical enemies to kill him in very few hits and giving him unreliable avoid. He has little difficulty defeating and damaging most enemies due to the universally low Resistance among enemy units and his good stats, but players will have to be careful in ensuring his survival.

Artur has two promotions in Bishop and Sage. Both are functional for his needs and give almost identical statistical bonuses, but Sage allows him to use Anima magic and a D-rank in staves while Bishop gives him the Slayer skill and a C-rank in staves. Most notable is his Bishop promotion's higher staff rank, which makes him one of the best staff users in the game. He is, alongside Saleh alone, one of the fastest units to gain the ability to use A ranked late-game staves while also sporting high magic stats. He also gains a damage multiplier against monsters that allows him to one-round nearly every monster in the game. While Sage is functional, it is not as versatile or unique a class for him and cannot accomplish all the things he can as a Bishop, though he can competently wield Ivaldi (which is inadvisable for a Bishop anyways, as the Slayer skill is negated by the multiplier on Ivaldi) while retaining a high Magic cap. With the Bishop's Slayer skill making the Aura tome stronger than the Ivaldi against monsters, it is a valid choice to have Artur S-Rank staves instead to maximize both offense and support in the final stages of the game.

Silver Saint
A sincere monk of Renais who has come to Askr to play the role of winter envoy. Appears in Fire Emblem: The Sacred Stones.

“The rest... is up to you.”
—Death quote
“I have yet to repay you for helping me fight those abominations. Please, let me stand by your side a while longer.”
—Artur speaking to Eirika at the start of Chapter 7
“That's the king of all demons...What a ferocious sight he is.”
—Artur referring to Fomortiis in Final Chapter

Artur, Saint of Light (純明なる聖者 Jun meinaru seija)
"Artur moved to Renais to help rebuild the shattered country. He worked without rest to ease the pain and grief of those who suffered during the war. His self-sacrifice made him into a folk hero among the peasantry."

A Support with Lute
"Artur and Lute were married upon their return. Artur handled the housework, but otherwise, their lives were unchanged. When they had a son, Lute's interests shifted from studying Artur to studying her son's baffling habits."

Artur is illustrated in the trading card game Fire Emblem Cipher with the following cards: 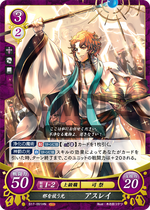 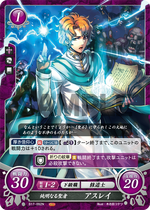