Bow Fighter
[view]
“Alright, I'm in. Daisy, you sure have grown up since I saw you last.”
—Asaello

Asaello is a character from Fire Emblem: Genealogy of the Holy War. He is the substitute character of Febail if Brigid was not paired up, and is the brother of Daisy. He is also known as "The Hitman from Conote" and comes from a family of hunters in the area. Unlike his counterpart, Asaello will never attain the Yewfelle bow. Additionally, he has his own personal conversation in Chapter 8, whereby if he visits a certain village, he will gain three points of strength.

Asaello initially holds a rather hateful grudge towards noblemen, owing to the fact that his parents were killed as a result of being caught up in the crossfire of the Munster-Thracia war. This perception of his changes when he encounters Seliph's army, where he comes to appreciate and even admire them. If Asaello falls for Muirne, he will confess to her that he feels frustrated at being powerless in the last battle, and wish he could have just a little Crusader blood flowing through his veins. Asaello is also well-loved by children, and is teased for it by his sister.

Asaello comes off as cold and deadly, having built a small fortune on fighting in the arena and working as a hitman according to his sister. Despite his quiet and intimidating exterior, he has a soft spot for children and protecting their innocence.

Asaello is a decent character as far as substitutes goes. He comes with a very high base strength, skill, speed and defense. While he suffers from low Luck, his Luck growth is extremely high, though his Skill and Speed are not very likely to grow at all. The secret event which takes place in the same chapter he is recruited in, also boosts his strength by 3 points, allowing Asaello to inflict large amounts of damage with his already powerful Silver Bow. With Pursuit and Charge, he can rain down multiple attacks on his enemies and be a very valuable asset to your team. Nevertheless, he is a downgrade in almost all respects compared to Febail.

In Chapter 8, Daisy can recruit Asaello if she talks to him.

In Chapter 8, Asaello can talk to Seliph, but nothing will result of it.

In Chapter 8, if Asaello visits the village northwest of Conote, he will have a conversation in which he will gain three points of strength.

“Yeah, sorry about that, but I realized that I'd much rather die than help you. Too bad it's you who'll die instead.”
—Asaello's battle quote versus Bloom in Chapter 8 of Genealogy of the Holy War

Asaello is illustrated in the trading card game Fire Emblem Cipher with the following cards: 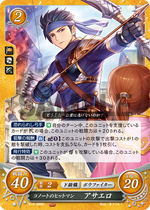 Asaello is possibly derived from Asal, a figure from Irish Celtic mythology who was King of the Golden Pillars.