Chapter 4x: The Hero of Winds

Kylen Deporter
[view]
“We swore to each other that we would live and die together, Lord Leif… Was that an empty vow? I still remember it. And I've chosen to aid you as much as I can.”
— Asbel to Leif

Asbel is a playable character in Fire Emblem: Thracia 776. Hailing from the free city of Hrest, he is a 15-year-old Mage who is Ced's pupil and one of Leif's close friends. Asbel is also the exclusive wielder of the Grafcalibur tome.

Asbel first met and befriended Leif 10 years before the events of Thracia 776. Leif, who was seeking respite from the Empire, came to live in Hrest under the protection of Asbel's father, who was the city's bishop at the time. For two years, Leif remained hidden in the city until the citizens themselves informed the Empire of his whereabouts.

Leif was forced to flee to Tahra thereafter, and Asbel fled along with him. Asbel's father remained behind in Tahra to buy the prince and his son time to escape, but was subsequently captured and executed. Asbel was separated from Leif three years prior to Thracia 776 when the prince escaped to Fiana with Finn and Nanna.

Despite this, Asbel persisted in searching for Leif, never forgetting the pledge he had made with the prince to reclaim Thracia with him. After losing track of Leif's whereabouts, however, he ended up in Munster.

At some point after entering Munster, Asbel met Ced, who taught him the basics of magic, including how to wield the powerful Grafcalibur tome. Asbel subsequently joined Ced as a member of the Magi Squad, aiding them in their quest to oppose the Empire while also keeping his eyes peeled for any signs of Leif.

Asbel first appears in Chapter 4x, where he assists Ced in releasing the children captured by the Loptr Church and locked up in the Munster dungeon. When he learns that Leif had been imprisoned in the same castle, as well, Asbel hastens to find his friend, leaving Ced after promising to join up with him after the war ends.

Asbel then goes on to continue supporting Leif in his cause to liberate Northern Thracia from the Grannvale Empire. He remains by Leif's side thereafter, seeing the Liberation Wars to their end. Asbel returns home to Hrest afterwards, taking his father's place as bishop and subsequently earning the title of Great Sage across Thracia.

Asbel is characterized by a determined, loyal, and plucky attitude. This is shown through his refusal to give up on looking for Leif despite losing contact with him for several years. His loyalty especially shines through on reuniting with his friend, as he reasserts his resolve to reclaim Thracia with Leif.

As the first offensive magic user who joins in Thracia 776, Asbel starts off frail, but can easily become a valuable asset to the team after being trained. He starts off having difficulty doubling and killing enemies because he is weighed down by Attack Speed problems. It is thus recommended to give him the Ced scroll early on to guarantee a Speed increase every level-up, as well as to slightly boost his Magic. He will quickly snowball to become one of the army's most potent nukes and boss-killers. He should be promoted as soon as possible in order to reap the benefits of Sage's massive promotion bonuses—among them being D-rank staves, which gives him another bit of utility.

Asbel's personal weapon, Grafcalibur, gives him a tremendous edge in combat due to its low Weight and high Critical rate. Combined with Asbel’s own FCM of 3, this means he is guaranteed to perform critical attacks on his second strike. This is a major factor in Asbel's status as a great bosskiller: thrones provide a +10 boost to enemy Defense, but do not similarly boost Magic, which means that for much of the game, the easiest way to defeat any given boss is to throw Asbel at it.

You should be cautious in their placement of Asbel on the field as well, as he has low HP and Defense. He may also have trouble against bosses with Master weapons, as they can kill him in a single round. His supports from Leif and, later, Ced, will help him with his Avoid and Accuracy, so staying in range of them will benefit him greatly. He can also be given the Life Bracelet to make him less easily killed by stronger bosses.

Windswept Youth
A wind mage from a small city in Ulster, Hrest. Undertakes a long journey in search of Leif in order to fulfill his pledge. Appears in Fire Emblem: Thracia 776.

“Lord Leif, I shall be waiting for you up ahead. Please be careful!”
—Asbel

"Asbel fought alongside Leif for the entirety of the war, serving as his trusted aide and confidant. For each step Leif took down that harsh road, Asbel was always beside him, helping him shoulder the war's burdens. Afterward, he returned to his hometown of Hrest, where he became a priest, as his father was before him. In only a few short years, tales of Asbel the Sage had spread to every corner of the land."

Asbel is illustrated in the trading card game with the following cards: 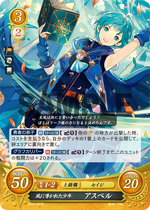 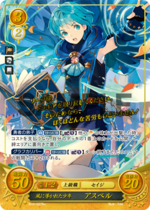 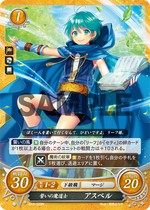