Church of Seiros
[view]
The Ashen Wolves is a group that inhabits Abyss. They appear and play a critical role in Cindered Shadows, a DLC side-story in Fire Emblem: Three Houses. They claim to be the secret fourth house of the Officers Academy, but there is no official public record of their existence, merely known by those who are aware of Abyss.

When becoming the envoy for the Church of Seiros to Abyss, Aelfric discovered several denizens of the abyss who were around the age of the Officers Academy students. Desiring to help Abyss eventually return to the surface, he worked together with Rhea to create a pseudo-house in Abyss with the hopes of giving them a somewhat proper education like the students above them. This lead in 1165, to the creation of the fourth house in name only. Rhea herself gave the house its name, the Ashen Wolves, after the beasts who guard the Blue Sea Star.

Clothing of the Ashen Wolves resembles the typical students' uniform of the Officers Academy with some minor distinctions, the biggest of which being the color scheme. Instead of focusing mostly on black and gold, the Ashen Wolves focus more on silver and grey. Additionally, they have black chains over their clothing that no other students have.

Much like the other three classes, the Japanese pronunciation of the Ashen Wolves takes their names from German. The Ashen Wolves are roughly called "wolfklasse," which means "Wolf Class."

All four members of the Ashen Wolves.

Official artwork of the Ashen Wolves. 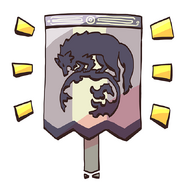 Artwork of the Ashen Wolves banner from the Fire Emblem Heroes guide.