Leader of the Disciples of Order

Janet Day
[view]
“Ashera is neither kind nor loving to the beings of this world. Neither is she holy nor base, angel nor devil. She is...restriction. Order. Stability. Past. Certainty. Restraint. She is Ashera.”
—Yune, about Ashera

Ashera is the final boss and one of the main antagonists of Fire Emblem: Radiant Dawn. She is the goddess of Tellius who is worshiped across the continent. She sleeps in Begnion's Tower of Guidance and is awakened when the war reaches its peak. She is one half of the creator Goddess Ashunera: the embodiment of order, stability, and law.

About 800 years prior to Radiant Dawn, a great conflict arose between the Beorc and Laguz. In an attempt to stop the fighting Ashunera caused The Great Flood, a great deluge that killed all except those living in the highest peaks of Tellius. Lamenting for the destruction she caused, Ashunera, under the advice of Lehran, split herself into two beings. Her fission resulted in two separate beings of her original self. Yune, a child entity who would embody her emotions and Ashera who would embody order.

Believing that she could only become perfect if Yune was erased completely, thus ridding her own chaos, she summoned her Three Heroes to fight Yune. Though having won the conflict, on Altina and Lehran's advice, she consented to have Yune imprisoned in a medallion instead, which would come to be known as the Fire Emblem, although even this slowly drove Ashera towards being cold and unfeeling.

Lehran again tried to appeal to Ashera to restore Yune to herself, but without success. Instead, Ashera arranged a covenant with Lehran, Altina, Soan and Dheginsea: She and Yune would enter a deep slumber for one thousand years, and if upon awakening the beorc and laguz there was to be no fighting and they maintained a prosperous peace throughout this time, the two would reunite into Ashunera; however, if they failed to do so, she would rain divine retribution for the people's sins upon them. She also declared that, if during her slumber, there were doubts as to whether or not the world could be saved, to wake her up early by singing the Galdr of Release, after which she and Yune would speak with each other and decide on which actions to take.

With this covenant agreed to by the four representatives of the laguz and beorc, Ashera thus entered her long sleep within the peak of the Tower of Guidance. To prevent judgment day from coming to pass, Ashera's heroes spread legends of the 'dark god' contained within the Fire Emblem to discourage warfare. In the years since her descent into sleep, Ashera's role as the guardian of Tellius in the eyes of its people was mystified, and she came to be worshipped as a kind and loving goddess by the people of Begnion and other lands, with awareness of her true nature being eluded.

Ultimately, Ashera was awakened well before the end of 1000 years threshold. At the peak of the war between Begnion and the laguz, the seal on the Fire Emblem progressively weakened and unstable, with the release of Yune and awakening of Ashera being imminent. Singing the Galdr of Release, Micaiah releases Yune from the Fire Emblem and awakens Ashera.

When she awakens, Lehran advised her that the past centuries had been dominated by war and so her covenant with the people of Tellius had been broken. Disappointed to see that the laguz and beorc broke their promise, and determining that her children were beyond redemption, Ashera passes her judgement, turning most of the world’s denizens to stone, despite the full terms not being met, accidentally sparing only those in Yune's presence and all Branded.

Aware that her other half had shielded a small faction of warriors from her judgement, these being Ike, Elincia and Micaiah's parties,

she restores life to a small number of Begnion soldiers and politicians to form an army for herself, the Disciples of Order, to eliminate them before they could have a chance to confront her; none of the Disciples, including their leader Lekain, were made aware of Ashera's true nature and were misled into believing it was Yune who petrified the world.

With Yune's help, Ike, Micaiah, and the most elite beorc and laguz are able to power through Ashera's forces and make their way to Ashera's dwelling. Consistently failing, Ashera resurrected the disciples from the dead over and over to ceaselessly bombard Ike's company as they prepared to scale the Tower of Guidance.

At the top of the Tower, Ike's company confronted Ashera and attempted to convince her to stand down, with Yune explaining how the evolution of the Zunanma's descendants, namely the Branded, meant the people of Tellius had a chance to grow into something even better and more decent, but Ashera maintained that the chaotic nature of people and their evolution without her guidance was a threat in need of destruction. With their pleas falling on dead ears, Ike's party thus engaged Ashera in battle, defeating the auroras shielding her and the elemental spirits in her service, with a divinely empowered Ike managing to overpower Ashera, striking her down with the divine sword Ragnell. Her judgement at an end, Ashera dissipated and vanished completely.

After Ashera is defeated, Yune is able to reunite with her other half, and the Goddess Ashunera is reborn.

As the embodiment of Order, Ashera believes that her role as creator of the world and the Beorc and Laguz gives her free reign to enforce her beliefs on them and eradicate them should they be beyond salvation due to war and conflict. Devoid of her emotions, Ashera comes off as cold and unfeeling to the masses and only sees Beorc and Laguz in a black-and-white fashion.

However, she placed great trust in Lehran, allowing humanity a chance to show that they could keep Order for a thousand years of slumber, thus showing that she has some sentiment of hope for humanity as well as some lingering sense of trust in those who are close to her. Before going to sleep, she also expressed a strong desire to become Ashunera once again.

“You would face me in battle? I need no further evidence of your kind's imperfections. Perish, flawed one.”
—Ashera's battle quote

Ashera: It is tragic that you are too limited to see how hopeless this is. You cannot hope to defeat the divine.
Ike: You're right. We can't hope to defeat you.
Ashera: Then why continue?
Ike: You haven't left us much choice. I'd rather die like this instead of being turned into some mindless statue.
Ashera: Simpleminded fool...

Ashera: Don't waste your energy, fleshling. You are physically unable to harm me.
Micaiah:Yune... I'm fine. I can hear you. No, I'm not afraid. I know you're with me.

Ashera: Ah, son of the dragon king... You may be great among the enfleshed, but you are no match for me.
Kurthnaga: Goddess Ashera, please listen to me. We know that we are clearly imperfect, but you, unnaturally created of pure order... Might that not be considered an imperfection?
Ashera: No, I am perfect. Free of emotion, I have no doubts. Therefore I commit no errors.

Ashera: Lehran, you have joined my enemies?
Lehran: My goddess... Never before have I defied you in even the least thing. But I have seen the error of my ways and wish to save the people whom I once desired to destroy. I am one man, and my life is precious. How much more precious are the lives of the countless multitudes?

Ashera is illustrated in the trading card game Fire Emblem Cipher with the following cards: 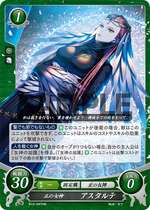 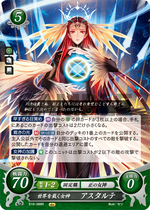 Ashera's English name is likely derived from the name of the Semitic mother goddess Asherah. Her Japanese name, Astarte, is the Greek form of the name Ashtoreth, another goddess in Central Asian ancient mythology. She is also an ancient pagan goddess of Canaan, whose male counterpart is Baal.