Brook Chalmers
[view]
“It's true. The world may be destroyed by the coming of the dark god. Then again, it may not. I question the way in which our society is designed. No matter what strength a person has, it is the station he is born into that controls his destiny. And you cannot control where you will be born. Do you believe that a person of low birth should simply endure the curse of his station? I think not. If you are stronger than those around you, you should benefit from your strength. This is why I will use my strength to remake this world. Class and rank will not matter. Human and sub-human will not matter. The strong will possess everything. The weak will submit to their will. Is this not the meaning of peace?”
—Ashnard, to Reyson in Path of Radiance.

Ashnard, also known as the Mad King, is the 13th King of Daein and the main antagonist of Fire Emblem: Path of Radiance. He wields the wicked sword Gurgurant, and his mount is the twisted body of Rajaion, the Black Dragon prince of Goldoa. He is unlocked by completing fifteen playthroughs of the game.

The 13th King of the nation of Daein, Ashnard wages war on Crimea in an effort to ignite a continent-wide conflict. His goal is to obtain Lehran's Medallion, the Fire Emblem, which holds the spirit of a dark god that thrives on chaotic energies. Although he obtains the medallion and makes numerous efforts to sow the seeds of war across Tellius, he is ultimately defeated at the end of the game despite being able to use the medallion to gain god-like power. Ashnard's wyvern mount is in fact not a wyvern at all, but the warped form of Rajaion, the prince of Goldoa, a black dragon laguz, and Ena's fiance as well as the brother of Ashnard's de facto wife, Almedha. Before becoming king, he was a great warrior who was able to almost single-handedly grant victory to Daein in a minor conflict between Daein and Begnion. His rise to power was considered highly unlikely, because a long list of other relatives stood ahead of him in line for the throne. Although it is publicly believed that a major illness led to the deaths of the other potential rulers, in reality, they were all killed by Ashnard.

In Radiant Dawn, it is revealed through Ashnard's de facto wife, Almedha, that Ashnard had tricked his father, the king into signing a blood pact. When the king unknowingly broke it, many citizens of Daein perished under the blood pact's plague. Ashnard ended the blood pact by killing his father and destroying the document. One year after the plague subsided and all of the Daein royal family in succession for the throne were dead, Ashnard was crowned King of Daein. His coronation occurred 18 years before Fire Emblem: Path of Radiance. It is also revealed that Ashnard is the father of Soren.

Ashnard believes that the current society, based on Begnion's hierarchy, is wrong. He believes that one's lot in life should be solely based on their power; he tells Reyson that class and species will not matter in his world, that the strong will ultimately rule the weak. This likely explains Daein's system, where those who display great levels of might, particularly in combat, have the ability to gain much power within Daein society, regardless of class or social standing.

Help Description: The Mad King of Daein. He desired to remake the world by releasing the chaos of Lehran's medallion, so that strength would dictate authority. He lost the war and his life to Crimea.

*Only Ragnell, Dragon Breath, Giffca, Naesala, Tibarn, And certain S-Rank weapons can hurt him in both forms.

*The Second Battle commences right after you kill Normal Ashnard.

Ashnard can be a difficult boss on hard mode and above. While on Easy or Normal difficulty settings, Ike is often capable of besting Ashnard on his own but having help from Giffca and Elixers does help quite a bit as the former can inflict more damage and the latter is helpful in case Aether hasn't been activating. But on Hard Mode, Ike is often the only character who can match him reliably during the first battle, and the second battle has him growing stronger to the point where he can kill maxed stats Ike in two hits. It is important to come prepared for the final chapter with some good healing utility and Ike may need to rely on enemy phase combat to be safe from getting one turn killed.

Mad King
The thirteenth ruler of Daein. Plotting to wield his power to rule without opposition, he plunges the whole continent of Tellius into war. Appears in Fire Emblem: Path of Radiance.

Ashnard is illustrated in the trading card game with the following cards: 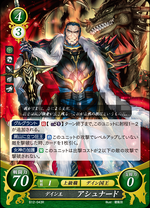 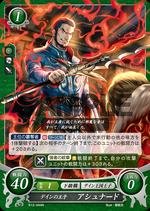 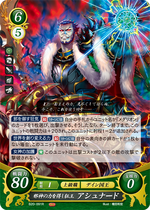