Epilogue
[view]
“The miasma of war is beginning to shroud the world. However, I shall not again be frightened. As one born of the hopes of man I shall protect this world.”
—Ashunera to Lehran

Ashunera is a non-playable character from Fire Emblem: Radiant Dawn. She is a creator goddess that descended upon the world which initially comprised of only water.

Ashunera created many forms of life, as well as all the land such as Tellius. The Zunanma loved her and called her the Goddess of Dawn in reference to the bright color of her hair. When the Zunanma's descendants, the beorc and laguz, went to war, she attempted to stop them. However, she lost control of her emotions and accidentally flooded all of the continents in the world except Tellius.

In order to prevent another flood from occurring, she discarded all of her emotions, which manifested as Yune, the Goddess of Chaos. She consequently became Ashera, the Goddess of Order, and grew distant from her creations.

One thousand two hundred years after the events of Radiant Dawn, Ashunera finally returns to Tellius and once again watches over it as the creator. She also has a conversation with Lehran in the final dialogue scene in the game.

Ashunera is illustrated in the trading card game Fire Emblem Cipher with the following cards: 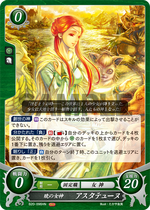 Ashunera as a Goddess in Fire Emblem 0 (Cipher). 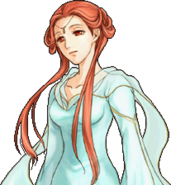