The Assassin (アサシン Asashin) is a combat physical class that is first introduced in Fire Emblem: The Blazing Blade. Taking on the position of the retired Thief Fighter class, the Assassin class acts as the promoted form of the Thief class, wielding Swords or Knives as its primary weapons of choice. Jaffar stands as the character who introduced the Assassin class to the series, assuming it as his base class in The Blazing Blade.

In Path of Radiance, the Assassin class is unique to Volke, a Thief who promotes into it after a story event that takes place after Chapter 19 concludes. For the first time in the series, Assassins wield actual Knives instead of Swords.

In Radiant Dawn, the Assassin ( Asashin) class is again unique to Volke, acting as his base class.

In Awakening, the Assassin class is an optional promotion for both the Thief & Myrmidon classes. They are capable of wielding both Swords & Bows, and learn the skills Lethality & Pass at levels 5 & 15, respectively.

In TearRing Saga: Berwick Saga, the Assassin is an enemy-only class and acts as a beefed up Thief. It does not have the Lethality skill but does have the Shadow and Hide skills. Additionally, they are the sole wielders of the Assassin Dagger, which gives its wielder an 80% chance to inflict a critical hit. With one exception, every Assassin is armed with this weapon, making them extremely dangerous opponents. However, they also give 100 experience when killed or captured, regardless of their level, so it may be worth the risk to engage with them.

In Tokyo Mirage Sessions ♯FE, the Assassin class appears as one of promotion class for Virion.

In the spin-off title Fire Emblem Warriors, they appear as an enemy-only class and clone of the Swordmaster class, with the added benefit of being able to open chests.

It is important to keep in mind that the Assassin and Thief are different classes in regards to combat performance.

Assassins are considered to be a useful class to have on the battlefield, and they are widely feared when encountered as enemies. While they lose their ability to Steal after being promoted from Thieves, they do retain their ability to utilise Lockpicks and disarm traps. Despite being unable to steal, they gain the potential to be a formidable combat class, as they will, on occasion, perform a special lethal attack in which they will defeat a selected enemy target in one fell swoop, regardless of HP or Defense. This special ability is treated as a skill that is commonly known as Lethality. In addition to this, Assassins are known to possess high Critical hit percentages, and this in turn contributes heavily to their chance of activating the Lethality skill (50%). Lethality can even be activated when facing bosses (excluding final ones), but with 25% of the Critical hit rate instead of 50%. Also, when an Assassin activates a lethal attack, the experience they gain from killing the enemy is roughly double the experience that they would have earned if they had killed the enemy through normal methods.

Despite the strengths that have thus far been laid out for the Assassin class, it is not without its flaws; the class possesses low Strength and an equally low Strength cap, and it is therefore not unheard of for it to inflict zero damage on heavily-armored foes. Assassins should also be wary of the accurate attacks of Mages, as they will be able to take advantage of the class's moderate Resistance. Well-trained Assassins can, however, overturn a good number of these flaws, functioning as extremely effective killing machines with the capability of taking out entire armies with a single Killing Edge. The exception to these weaknesses is Volke, who not only has a very high Strength cap, but also high Strength base and growth. His Defense cap, growth, and base are also much higher than normal Assassins, making him a very powerful unit.

Being the promoted version of the Thief class (or Myrmidon class in The Sacred Stones and Awakening), the Assassin cannot be promoted any further.

In Radiant Dawn, the Assassin is considered to be a Third Tier class that is exclusive to Volke.

Concept artwork of the Assassin class from Path of Radiance.

Concept artwork of the male variant of the Assassin class from Awakening. 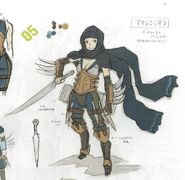 Artwork of Virion as as Assassin from Tokyo Mirage Sessions ♯FE.

The Raze Assassin that attempts to assassinate Reese during Faye's recruitment scene.

Animation of Jaffar attacking as an Assassin.

Animation of Legault attacking as an Assassin.

Animation of Marisa attacking as a female Assassin. 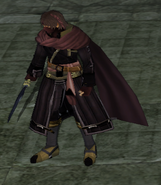 Battle model of Volke, an Assassin from Path of Radiance.

Battle model of Volke, an Assassin from Radiant Dawn.

Generic class portrait of an Assassin from Awakening.

Battle model of Gaius, a male Assassin from Awakening.

Battle model of Anna, a female Assassin from Awakening. 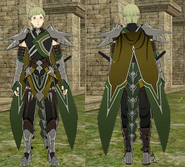 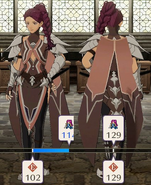