Thief
[view]
“I'm a spy, see. I gather information, steal things, check on people... Things like that.”
—Astolfo in Chapter 8: The Reunion

Astolfo is a playable character in Fire Emblem: The Binding Blade. He is a spy working for Ostia.

Astolfo met Hector for the first time when Astolfo tried to loot Castle Ostia. Astolfo was in the middle of stealing loot when Hector found him. Impressed by his skill, Hector hired him as a spy. He hastens back to the city upon news of Hector's death but is too late to stop a rebellion.

Some time before the events of the game, back when he was known as Gorlois, Astolfo was the husband of Igrene and had lived happily with her in Arcadia. However, his risky occupation as a spy forced him to abandon her years ago while repelling a bandit raid, as he did not wish to see her put through any danger on his account, thus "killing" the Gorlois identity. They also had a daughter; however, it can be assumed that Astolfo left before he could be made aware that Igrene was pregnant, as the child is never mentioned in any support conversations. In those, he is portrayed as an indirect war victim, having to abandon his wife to conceal her from the danger that comes from his work as a spy. Their daughter died early in her life.

After the war, he disappeared without a trace.

Of the three thieves, Astolfo has the highest base stats. Unlike the other two thieves, he has a decent Sword rank allowing him to use Killing Edges at base, and the 1-2 range Light Brand obtained in his joining chapter. Astolfo, due to his bases, is actually well-suited for combat in the Western Isles compared to Chad and he can also defend himself decently well in chapters 12x and 14, which feature Fog of War and some Axe-wielding enemies. In addition to this, his bulk is superior to the other thieves available in the game, which is useful for surviving possible blows while stealing and picking locks. These factors make him a strong contender for the title of best Thief in the game. It's important to note that the fact that thieves cannot promote in The Binding Blade will ensure that Astolfo will not be able to keep up with the rest of your army in terms of combat for the second half of the game, but he will retain his Thief utility regardless.

Astolfo - Shadow of Ostia
"After the war, Astolfo's name disappeared from the records. Legends say that he worked to rebuild Ostia, but nothing else about him is known."

Astolfo is illustrated in the trading card game Fire Emblem Cipher with the following cards: 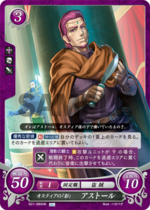 Astolfo was one of the Paladins of Charlemagne, as made famous in The Matter of France.

The name Gorlois comes from Arthurian legend. Gorlois was the Duke of Cornwall and the first husband of Igraine before Uther Pendragon.

Artwork of Astolfo in Fire Emblem 0 (Cipher) by Hatapug.

Astolfo as a Thief in Fire Emblem 0 (Cipher).

Astolfo as a Thief in the One Hundred Songs of Heroes Karuta set.

Astolfo's portrait in The Binding Blade.