Jamison Boaz
[view]
“While I have decided to lend you my sword, my allegiance lies with Princess Nyna- not you, my lord. I will follow your orders, but should I learn you have been false to her, or that you are manipulating her... Heads will roll.”
—Astram to Marth, Fire Emblem: Shadow Dragon

Astram is a playable character in Fire Emblem: Shadow Dragon and the Blade of Light, Fire Emblem: Mystery of the Emblem, and their remakes.

Astram is a mercenary of Archanea and the lover of Midia. He was forced to join the Dolunian forces under his ruler's orders. However, Midia managed to convince him to join the Archanean League, on Marth's side.

On Hardin's ascension, Astram was promoted and rewarded with the sword Mercurius, one of the Three Regalia of Archanea. Despite Hardin's fall to madness, Astram continued to serve him, on the basis of serving Princess Nyna and Archanea. He somehow resented Jeorge after he betrays Archanea, but Jeorge can convince him to abandon Archanea. Astram complies, but swore to make Jeorge pay if he turns out to be lying, though it turns out that he was telling the truth.

Astram is fiercely loyal to Archanea. He is quick to threaten characters he suspects for treason, and often without provocation. If the player initiates a conversation between him and Marth when he joins in Shadow Dragon, Astram says "heads will roll" if Marth ever planned to use or betray Nyna.

Astram is best used temporarily; there are many other Heroes who overshadow him, but he can still be of use thanks to his relatively high bases for his join time. He won't perform well late-game but if the player makes careful use of him, Astram can be a valuable asset.

Astram's main distinguishing trait over the rest of Shadow Dragon's cast is his sword rank. The only character who can also hit B-rank Swords without significant investment is a promoted Athena, with every other swordsman needing to be dragged up quite a bit. Tragically, however, swords are the least relevant weapon type for ranks by far; the massive surfeit of lance enemies nullify Astram's weapon rank advantages, and while the Wyrmslayer, Levin Sword, and Armorslayer are somewhat helpful, any Swordmaster can wield them with no prior training. Astram's only true advantages are his ability to wield Silver Swords at base, and being the closest to wielding Mercurius, but the former is only a damage boost, while the latter still takes him a great deal of effort.

Aside from that, Astram is very mediocre; his personal bases are almost identical to those of Ogma barring being prepromoted, his non-sword weapon ranks are nothing special, he cannot access most classes that would let him properly employ his sword rank, and his growths are decidedly subpar. He is far from unworkable, but tends to be little more than a spare hand to hold a Wyrmslayer in later chapters.

Note: Only accessible after beating the game on Hard mode or above

Despite his high status in the story, Astram is a very poor unit upon joining the army, particularly on any kind of higher difficulty setting. Astram will be outclassed by virtually any unit the player has been using regularly, with his bases barely outpacing those of characters like Palla or Sirius, who have been around far longer and had many chapters to outgrow him. A particular sore point for Astram is his Speed, which is fairly low for a promoted Hero (for comparison, it is only one point higher than Ogma's personal base), and his growth is average at best; he does not reliably cap Speed even when reclassed to Swordmaster. Furthermore, while Astram's personal Defense base is actually somewhat high, his HP is not, meaning enemies can still take him down fairly easily. Astram's sole strong point is his sword rank, and even that is easily attainable by many characters at his join time, due to Swordmaster's base C-rank.

Midia's Hero
Captain of Archanea's free company. Awarded the sword Mercurius in light of his heroism and loyalty. Appears in Fire Emblem: Mystery of the Emblem.

Mystery of the Emblem, Book 1

Midia: Astram! Why are you here...?
Astram: Midia? Is that you, Midia? Are you alright? It’s great... to see you again.
Midia: Ah... Astram. You didn’t know. The Altean army has already liberated Pales. We hostages were all freed, and now we’re fighting together with Altea. So you don’t need to help the enemy anymore.
Astram: Really? That’s great. In that case, I want to try my hand at challenging Dolhr once again.
Midia: Mmm, from now on we’ll be together. I’ll definitely not leave your side again.

Mystery of the Emblem, Book 2

Jeorge: Astram, how are you doing?
Astram: So it’s the traitor, Jeorge. What do you want with me?
Jeorge: Wait, Astram. General Eibel has already fallen. You won’t be able to win even if you continue fighting.
Astram: You want me to surrender...? Never! Even if I am the last one standing. I am a warrior of Archanea to the end!!
Jeorge: Why are you... Who are you fighting for? Are you fighting for Emperor Hardin?
Astram: No! It’s not because of that man, but because of Nyna... And for Archanea!!
Jeorge: But, did Nyna tell you to fight here? Do you really think that Nyna would hope for this kind of battle?
Astram: Well... I hadn’t seen Nyna for a while. I was told that she fell ill, and that I couldn’t see her. But... Since Hardin is Emperor of Archanea, I have no choice. If I don’t follow his orders I will become a traitor, and I will be betraying Nyna.
Jeorge: Astram, Nyna already entrusted the Emblem to Prince Marth. Do you understand... the meaning of her actions?
Astram: Wh-what!! When did this happen, Jeorge? Nyna requested Prince Marth for help?
Jeorge: I believe that is the only explanation. Astram, if you want to find out the truth then come with us... If you die here, what will Midia do? You must live on, for her. You must live on, so you can confirm with your eyes what is happening.
Astram: Hmm... I guess I have no choice. But, Jeorge. If this war is as Hardin said, and was caused by Prince Marth’s ambitions. I will never forgive you! Remember that!!

Midia: Hello, my lover.
Astram: Midia...? Midia, my sweet! Can it really be you? I feared you were dead.
Midia: Oh, Astram! How could you not have heard? Archanea is free! The Altean army came, and liberated the palace along with all the hostages within! Now we fight as one. Come with us, Astram! You needn't dance to Dolhr's fiddle any longer.
Astram: I've a mind to break their fiddle, for all the evils they have wrought..
Midia: Now you can. We can take them together.
Astram: That we can. ...Midia. I am sorry I left you alone. I will not make that mistake again.
Midia: No, you certainly won't. Now that I have you back...you'll find me exceedingly reluctant to let you go.
Astram: Ooh... Yes, I can see that! Just take care you don't crush me instead of Dolhr!

Astram: You are Prince Marth?
Marth: Correct, Sir Astram.
Astram: ...Forgive my lack of courtesy, but you and I need to be clear on a certain point.
Marth: Oh?
Astram: While I have decided to lend you my sword, my allegiance lies with Princess Nyna- not you, my lord. I will follow your orders, but should I learn you have been false to her, or that you are manipulating her... Heads will roll.
Marth: Well, Sir Astram...in the interest of keeping my head atop my shoulders, let me suggest this: Fight with me. Watch me, and then judge for yourself whether I am worthy of your skill, and of your help.

Astram: Bishop Boah.
Boah: Ah, Astram. Welcome back. I must say I am relieved. Where would Archanea's army be without its finest knight?
Astram: Nonsense... I am but one arrow in the quiver. Princess Nyna is the bow. So long as we have her to lead us, Archanea's light shall never fade.
Boah: Well spoken, child. But let us be honest: that light has not shone as bright since our defeat at the hands of Dolhr. It will take a miracle to restore Archanea 's prestige after this... Or, perhaps, some clever thinking. If our next king were to be foreign...
Astram: What? A king who's not Archanean?
Boah: Well, of course, the princess would need to approve of him. How do you feel about it, Astram?
Astram: I don't. I am a knight. I will leave the feeling to those whose job it is to feel and content myself with serving my kingdom...no matter how the kingdom might change.
Boah: Then you are a loyal knight indeed. Well...the future can wait a tad longer. We have a war to fight first...and win. Archanea's tomorrow depends on it.
Astram: That it does, Bishop.

Archanea mercenary
He joined the Archanea free knights to serve his people. Recently he finally married his loved one...

Midia's Hero:
Astram was made captain of Archanea's free company. He was given the sword Mercurius, and with it carved quite a name for himself.

"Astram joined the Archanean Rangers and worked for his people. He finally tied the knot in his spare time."

Astram is illustrated in the trading card game Fire Emblem Cipher with the following card: 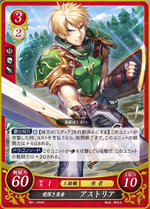 Astram is the accusative form of the Latin word astra, which means star.