Asugi is a playable character in Fire Emblem Fates.

Asugi is the son of Saizo, the nephew of Kaze, and the cousin of Midori. Like the other children of Fates, Asugi was placed in the Deeprealms to protect him from the war. As the son of Saizo, Asugi was given training in hopes of having him succeed as the sixth in a line of Saizos, given that he is his first born son. However, the pressure of becoming the next Saizo proved too much for him and he decided to discard that name, instead naming himself Asugi. According to him, that name means "gray". Sometime later, Asugi was hired by a bandit gang led by Funke who wanted to raid a nearby mansion. Although paid by candy, Asugi had doubts of the mission and wanted out.

Inside, Saizo and the army finish off Funke and his gang, allowing Saizo to eventually catch his son. Asugi finally tells his father that he wanted no part of the mission as not only did Funke want to rob the mansion, but also kill its owner. Asugi tells Saizo that no amount of payment could make him do such a thing. Asugi asks Saizo what he plans on doing with him. Saizo tells him that he is free to go, but he is no longer forced to be the sixth Saizo in name. Saizo tells him that the name was meant to live up to the honor and that Asugi seems to have found his own honor and tells him to enjoy his life. Asugi thinks for a bit and decides to join the army, seeing the opportunity to learn more and perhaps fix his father's "sourpuss face".

Regardless if married or not, Asugi eventually decides to carry on his father's legacy, and the Saizo name passes down at least 100 times.

A cool, sharp and able person, Asugi worries about inheriting his father's legacy, as he has little in common with his father. He is not particularly motivated to succeed him, given that his father hardly spent time with him growing up due to the nature of the Deeprealms.

He is extremely fond of both eating and making his own sweets and carries them around at all times, even being able to replicate several recipes just from eating the desserts, though this tends to conflict with his father Saizo, who hates sweets. With his confections having a cutesy aesthetic, he even bonds with Ignatius over their mutual love of cute things, but while Ignatius is shy about it, Asugi proudly declares that there is nothing wrong with that.

In the localized version, similarly to his Awakening counterpart, Asugi gives nicknames to other characters, which often describe their personalities or is out of sarcasm. Corrin is "Boss" (after commenting that "Bubbles" didn't quite feel right), Sophie is "Fumbles", Mitama is "Stars", Hisame is "Gramps", Rhajat is "Sunshine", Ignatius is "Fraidycat", Female Kana is "Little Miss Dragon", Midori is "Doc", and Dwyer is "Naps".

In his supports with Male Corrin, Saizo, and Soleil, it is revealed that like his father and paternal uncle, Asugi is very popular with girls due to his generous nature with his sweets. However, his true intention behind his generosity is information gathering, which he calls his own version of "sweet-talking". Soleil points out, however, that the real reason behind his popularity is because the girls can tell that he is a genuinely kind person.

He smells the best out of everyone in the army.

*Asugi will receive whatever secondary class that Corrin has access to if he has achieved an S-Support with her.

Asugi is the only second generation ninja available in Fates and as such faces stiff competition from the three first generation ninja. His natural strength and speed growths are shaky meaning without a speedy/strong mother or forged/unit effective weapon, he will struggle to effectively damage physically defensive units. He has a decent magic growth rate which makes him a good candidate for use of the Flame Shuriken or Felicia's Plate. From the ninja class, he gains access to Poison Strike and Locktouch. Poison Strike allows him to deal an additional 20% of the enemy's total HP after combat which can help wear down units with large amounts of HP as well as offer a way for him to deal with units with high res or defense.

He can upgrade to Master Ninja or the Mechanist class upon use of a Master Seal. From Master Ninja he gains access to swords and S-rank in shurikens. Swords allow him to gain advantage on units using bows and axes, increasing his survivability against these units as well as offering better coverage and stronger base weapons. S-rank in shurikens allows him access to Spy Shuriken, allowing him to hit three tiles away for scouting. He gains Lethality at level 5 and Shurikenfaire at level 15. Shurikenfaire gives a +5 boost in damage when using shurikens/daggers which is always useful. Lethality however has a low proc rate meaning it will seldom see activation. Mechanist gives him access to bows, making him a decent ninja killer but limits him to A-rank in shurikens and gives him a golem/beast weakness. At level 5 he gains Golembane which isn't very useful in Revelations and Birthright as not many enemies are counted as golems. At level 15 he gains Replicate which allows him to make one copy of himself per battle. This allows him to scout larger areas and provide support in the form of debuffing enemies or giving stat bonuses to allies but increases the risk of defeat due to the replica and Asugi sharing HP, meaning if one falls, the other does too, so use with caution.

Corrin- From Corrin, Asugi gains the Nohr Prince line shifting his use from shurikens to swords and dragonstones. Dragonstones allow him to gain increased defenses at the cost of some res and the inability to double, while he will have to start from E-rank in Swords meaning he will have to rely on weak swords until he builds up his rank a bit. If he has a magical based mother, he becomes a near copy of his mother in terms of growth rates. In Birthright he is limited to promoting to the Hoshido Noble line but allows him access to Hoshidan Unity to increase his skill proc and access to staves for support. In Revelations he gains access to Nohr Noble which allows him access to tomes for ranged magical damage as well as the powerful Draconic Hex skill allowing him to effectively enfeeble enemies that survive combat with him.

Orochi/Kagero- From them he gains access to the diviner class. While Kagero does not boost his magic growth, Orochi provides the biggest boost in magic power making him better at the onmyoji class than Orochi or Hayato at the cost of needing to start at E-rank tomes/scrolls. Many tend to boost his magical capabilities as more units in the Hoshidan routes rely more on physical strength than magical and so a magic oriented unit is in high demand, especially with Hayato's shaky growth rates and Orochi's low speed. Rally Magic is a decent skill if you want to make him a more support unit but rally bots like Shigure fulfill this role better and tomefaire is only useful if he keeps as a scroll/tome wielding class. He also gains access to basara which allows him to obtain the Rend Heaven skill and Quixotic skills. Quixotic allows a skill based Asugi to proc more often and synergizing with Rend Heaven for increased damage. Kagero increase his strength growth for a more physically based ninja, akin to herself and Saizo but not much variation in terms of classes and skills.

Dwyer- He gives access to the troubadour line which allows Asugi access to staves and tomes if he does not have a mother who can pass on a class with access to these weapons. From the Strategist class he gains a boost in magic and access to staves and tomes/scrolls, allowing him a more versatile use of his good magic growth. He gains Rally Resistance and Inspiration to boost his allies' defenses and relegating him to a support class but his decent magic stat should allow him to be an effective stave and tome user. Butler allows him to retain his proficiency in shurikens/daggers as well as giving him S-rank in staves making for a more directly useful unit. At level 5 he learns Live to Serve which is useful for keeping his HP topped off when healing on the front lines. At level 15 he learns Tomebreaker making him a deadly anti-mage unit. 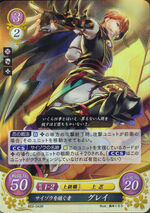 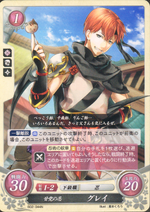 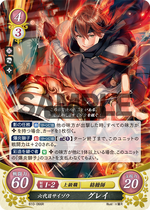 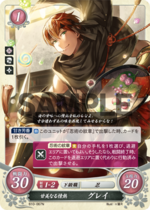 Gurei is an intermediate color between black and white. Gray/Gurei (グレイ) is a Japanese phonetic anagram of Guire (ガイア), Gaius' Japanese name.