Asugi (グレイ, Gurei in the Japanese version) is a playable character in Fire Emblem Fates.

Asugi is the son of Saizo, the nephew of Kaze, and the cousin of Midori. Like the other children of Fates, Asugi was placed in the Deeprealms to protect him from the war. As the son of Saizo, Asugi was given training in hopes of having him succeed as the sixth in a line of Saizos, given that he is the first born son. However, the pressure of becoming the next Saizo proved too much for him and he decided to discard that name, instead naming himself Asugi. According to him, that name means "gray". Sometime later, Asugi was hired by bandit gang lead by Funke who wanted to raid a nearby mansion. Although paid by candy, Asugi had doubts of the mission and wanted out.

Inside, Saizo and the army finish off Funke, allowing Saizo to eventually catch his son. Asugi finally tells his father that he wanted no part of the mission as not only did Funke wanted to rob the mansion, but kill its owner. Asugi tells Saizo that no amount of payment could make him do such a thing. Asugi asks Saizo what he plans on doing with him. Saizo tells him that he is free to go, but he is no longer forced to be the sixth Saizo in name. Saizo tells him that the name was meant to live up to the honor and that Asugi seems to have found his own honor and tells him to enjoy his life. Asugi thinks for a bit and decides to join the army, seeing the opportunity to learn more and perhaps fix his father's "sourpuss face".

In his supports with Saizo, he teaches his father that there are different ways to gather intelligence. Eventually, he decides that he will take his father's training to take up the name of Saizo. He states that by doing so, he will honor the Saizo name as it is his responsibility.

He is a cool, sharp and able person, but worries about inheriting his father's legacy, as he has little in common with his father. He is not particularly motivated to succeed him, given that his father hardly spent time with him growing up due to the nature of the Deeprealms. He is extremely fond of both eating and making his own sweets and carries them around at all times, even being able to replicate several recipes just from eating the desserts, though this tends to conflict with his father Saizo, who hates sweets. Asugi is very popular with women, a trait shared with his father and paternal uncle, Kaze.

Asugi has a passion for baking, and most of his confections have a cutesy aesthetic. He even bonds with Ignatius over their mutual love of cute things, but while Ignatius is shy about it, Asugi proudly declares that there is nothing wrong with that.

In the localized version, similarly to his Awakening counterpart, Asugi gives nicknames to other characters, which often describe their personalities or is out of sarcasm. The Avatar is "Boss" (after commenting that "Bubbles" didn't quite feel right), Sophie is "Fumbles", Mitama is "Stars", Hisame is "Gramps", Rhajat is "Sunshine", Ignatius is "Fraidycat", Midori is "Doc", and Dwyer is "Naps".

In his supports with the Male Avatar, Saizo, and Soleil, it is revealed that he is very popular with girls due to his generous nature with his sweets. However, his true intention behind his generosity is information gathering, which he calls his own version of "sweet-talking". Soleil points out, however, that the real reason behind his popularity is because the girls can tell that he is a genuinely kind person.

He smells the best out of everyone in the army. His birthday is January 1.

*Asugi will receive whatever secondary class that the Avatar has access to if he has achieved an S-Support with her.

Gray is an intermediate color between black and white. Gray (グレイ) is a Japanese phonetic anagram of Guire (ガイア), Gaius' Japanese name.

Asugi as he appears in Fire Emblem 0 (Cipher) as an Elite Ninja. 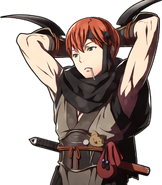 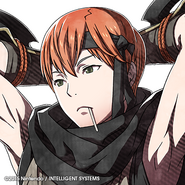 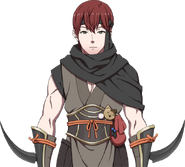 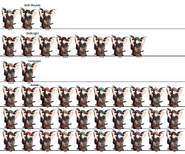