Myrmidon (Shadow Dragon and New Mystery of the Emblem)

Cristina Valenzuela
[view]
“It is the least ve can do. Vat sort of selfish creature do you take us for? Ve vill join you, and you vill be grateful. Do ve make ourselves clear?”
—Athena, as she joins Marth's army in Shadow Dragon

Athena (Athenais in the French version) is a recruitable Myrmidon and is one of the exclusive characters in Fire Emblem: Shadow Dragon.

Athena was saved from drowning by villagers of a town near Castle Archanea and in return she offered to rescue the town's children when they were captured by pirates. The village elder, worried for her safety, convinces her to stay until help arrives. When Marth arrives at the village, she requests to join Marth in saving the children. After the battle, she decides to permanently join Marth's army. After the war she disappeared to parts unknown, although it is rumored that she returned to the border town where she was born.

She reappears in Fire Emblem: New Mystery of the Emblem. Athena first appears in the prologue, unless the player chooses Jeorge to participate in the training instead. She will later appear in Chapter 13x: Within the White Darkness, where Marth encounters her being ambushed by Clarisse.

Athena is a skilled warrior who lives by a strict code of repaying any act of kindness given to her in full. She speaks with a heavy accent, notably saying "W" with "V" sounds and commonly refers to herself in the plural "we". It is not known where she hails from, but she is unfamiliar with some words used in basic speech and even mishears words on occasion.

Complete Chapter 6 with 15 or fewer units (in your whole army) to unlock Chapter 6x. When you arrive in Chapter 6x, visit the only village on the map and Athena will join you.

Despite her average at best stat growths, Athena's bases should make up for that, with the exception of having low Defense for a level 10 Myrmidon. She has potential to be a very good natural Myrmidon. However, her chapter requires some characters being sacrificed to access it, and before then it is possible that Navarre has already outdone her statistically.

Another possibilty for her is reclassing into a Pegasus Knight, filling the flier slot Jagen would usually occupy as a Dracoknight. While she can only use E-rank lances for quite some time, her ability to promote early on, her decent speed and strength bases and her solid offensive growth rates makes it easy for her to surpass most other options for your extra flier slot for a long time and allow her to stay viable on higher difficulties. Remember though that the base speed of the Pegasus Knight is significantly lower than the Myrmidon's, so she'll most likely need to use a speedwing in order to double stronger enemies if you play on Hard 4 or higher.

She is recruitable as a level 10 Myrmidon in the prologue if you take the first option after Prologue 3. At this stage, she can be immensely useful on the harder difficulties such as Maniac and Lunatic mode. On Hard or Normal mode, she is less necessary. She leaves at the end of the prologue. Unfortunately, she will rejoin your army at the end of Chapter 13x, at the same level she left at which will mean she will be under-leveled. It would be a good idea to use the preparation arena or the arena in Chapter 15 to train her. As for her stats, she will actually turn out very good if you put the time and effort into using her, however it is much easier to train Navarre as he will often turn out slightly better with a much easier time training as he joins at Chapter 7.

Borderland Sword
A foreign warrior with a straightfoward personality. Speaks with an accent. Appears in Fire Emblem: New Mystery of the Emblem.

Athena: Vell, vell... You, must be the help. Ve vish to fight vith you.
Marth: Ah, splendid. How many of you? Gather your men, and we'll be on our way at once.
Athena: Men? Ve are a voman. Vun voman! Are you blind, stupid manchild?
Marth: Vat? ...Ahem, what? Oh. Right, pardon me. I, uh, I am Marth, prince of Altea. I heard pirates took the village children, so I brought my army straight away.
Athena: ...If you say so. Ve are called Athena. The vee vuns have been visked away to a castle south of here. Come. Ve have a fair bit of skill vith a sword; hopefully the same can be said of you, Marth of Altea.

Athena and Male Avatar base conversation 3

Athena: [Avatar], thanks to you, ve understood all sorts of things. Ve must thank you for everything. Ve are very grateful.
[Avatar]: I'm glad for having spent time with you, Miss Athena.
Athena: Ve vant to show our feelings to [Avatar]. Ve vill apologize with our life.
[Avatar]: Excuse me? No, no, you used the wrong word again. Didn't you mean "thank", instead of "apologize"?
Athena: Yes. "Thank".
[Avatar]: Oh.
Athena: As thanks, ve vill become your bride.
[Avatar]: Wha...!? M-Miss Athena... It seems you used the wrong word again.
Athena: Vat? Ve are mistaken? Then... Ve vill become [Avatar]'s voman?
[Avatar]: That's even wronger! Er... I don't know what kind of thanks you had in mind. But it's fine. I've already received enough.
Athena: Ven? Ve don't remember giving any.
[Avatar]: Be it in the battlefield or outside of it, we've always been together. You're a precious comrade to me. The bond that was born between us... cannot be replaced.
Athena: [Avatar]... Ve feel the same. Even if the vords are different, and the lifestyles are different, bonds between people are the same... Ve feel a bond with you as well, [Avatar]...
[Avatar]: I see. Miss Athena knows the word "bond".
Athena: ...Ve know that much. Stupid [Avatar].
[Avatar]: I-I'm sorry.

Vun Voman
"Vere she vent, nobody knows... One theory is that Athena returned to the border village where she was born."

Vun Voman
"Athena set sail in a rowboat one day. Vere she went, nobody knows. Perhaps she returned to her distant homeland or washed up elsewhere."

Athena is illustrated in the trading card game with the following card: 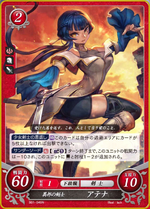 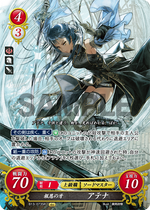 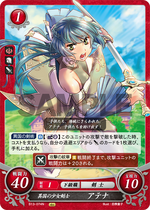 Athena's namesake is the Greek deity Athena, the goddess of wisdom and war. Her Roman counterpart is Minerva.