Archsage
[view]
“The world is full of mysteries. Solve one, and along comes another… Before I knew it, I'd grown distant from my fellow man. Hunger… It knows no bounds.”
—Athos

Athos (Atos in the Fire Emblem Museum) is a playable character in Fire Emblem: The Blazing Blade. He is one of the Eight Legends from The Scouring framed by future generations as the Archsage. He is incredibly old and is a master of all forms of magic within the game. Athos is first seen in the Chapter Living Legend talking with Louise, Pent's wife. He is nicknamed Graybeard by Hector.

As one of the Eight Legends, Athos helped to drive the dragons out of Elibe during the Scouring. After this war had passed and Elibe was divided into its different territories, Athos secluded to the Nabata desert. About 500 years before the story of Fire Emblem: The Blazing Blade took place, Athos met Nergal wandering the Nabata Desert. Their shared desire to seek truth and knowledge in the world brought them together, and they became fast friends, as well as equals in knowledge and magic.

One day, as Athos charted the desert, he discovered a sanctuary where surviving dragons of the Scouring, most of whom were Divine Dragon refugees, and men lived in peace with each other. Athos and Nergal used their magic to create a paradise for the inhabitants to the sanctuary and the two men settled there. The sanctuary then came to be known as Arcadia. Over the many years that Athos and Nergal stayed in Arcadia researching in the dragons' libraries, their paths to knowledge began to differ.

Athos wished to use the knowledge he'd acquired to expand his dragon-human paradise across Elibe, while Nergal learned how to steal another being's life force, or quintessence, and turn it into power. Starting with small animals, Nergal eventually began killing humans to gain more quintessence. Athos and the village elders tried to persuade him to stop, but by now the power he'd gained from the essence had bewitched him. To prevent Nergal from stealing the quintessence of dragons, Athos and the elders faced off against him, then tried to drive him into the desert, where he would meet his end. During this confrontation, Athos inflicted a heavy wound to Nergal's face, deforming his right eye and leaving a scar across his forehead. However, Nergal had escaped with his life and fled to Bern, gaining power slowly to avoid detection.

At some point before the events of the game, Athos met Hawkeye, who became his vassal, Pent, who became his student, and Pent's wife Louise, who kept him entertained during her visits, and Uther managed to find out that he was still alive, leading him to Athos the Living Legend.

When Eliwood and friends arrive at his temple, he tells them about the Shrine of Seals, gives them Afa's Drops, and sends them back to Pherae where Eliwood meets his mother. He later meets them again at the Shrine of Seals and convinces Bramimond to release the seal on the divine weapons. However, Nergal then appears and takes Ninian, with Athos barely protecting the others from Nergal's attack, stating that he would not have been able to protect them if Nergal had truly intended to kill them.

In Louise and Pent's Support Conversation, it is mentioned that Athos would not eat unless Louise convinced him to. Left alone, he might not have eaten anything. Pent explained that due to his incredible age, Athos surpassed the needs of human flesh long ago and needs neither food nor rest.

He automatically joins the player's party in the Final Chapter with the Sol Katti, Durandal, and Armads, which are for Lyn, Eliwood, and Hector, respectively. He also comes with his personal Anima tome the legendary Forblaze and Saint Elimine's legendary Light tome Aureola.

After the final boss fight, Athos, having exhausted all of his strength, collapses. Knowing full well that his life is at an end, Athos, after bidding farewell to Bramimond, tells Eliwood, Hector, Lyn, and Nils to not grieve for him, since he will soon be reunited with all of his deceased friends. As a final gift, he tells them about how, in the future, an evil star will rise in Bern and all of Elibe will be consumed in war. However, he tells them to not be afraid, telling them that Lycia will once again bring hope. He then passes away with a smile on his face.

Athos has low HP and average speed. However, his magic of 30 can make him devastating with a Luna tome, as long as he is not going to be doubled because of its high weight. Also, his S rank in all types of magic and staves can make him very useful. Fortify (obtainable alongside Renault in the previous chapter) allows him to actually recover all the party members (most of the time) to full health, working as an excellent healer, but as an offensive unit he can have troubles with his moderate constitution and the high weight of Forblaze, Aureola and Luna, the most powerful tomes avaliable for him to use against the bosses of Light.

It is worth noting that, despite it seeming like a waste of a Speedwing or Body Ring, giving one to Athos is highly advised, as he can possibly one-round the final boss with one, due to the fact that he will be able to double with the Luna tome equipped. A Filla's Might can also make him the only unit in the game capable of OHKOing the Fire Dragon (the other Luna user, Canas, has his Magic cap one point too low to OHKO).

Archsage Athos
Athos died in a foreign land. Those who saw his face said that he seemed as though he had at last found true peace.

Athos is illustrated in the trading card game with the following card: 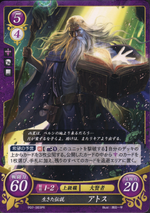 The Autonomous Monastic State of the Holy Mountain or Mount Athos is a semi authonomous state in Northeastern Greece, regarded as a holy site for Orthodox Christians. The sketae (cloisters) and monasteries there are known for their art, and some of them (more specifically, the Simonopetra Monastery) for sacred music.

Athos is also the name of one of The Three Musketeers from the book by French author Alexandre Dumas.

Athos in a flashback in Fire Emblem: Hasha no Tsurugi.

Artwork of Athos in Fire Emblem 0 (Cipher) by Ippei Soeda.

Athos as an Archsage in Fire Emblem 0 (Cipher).

Athos passes away after fulfilling his mission.

Athos's portrait in The Blazing Blade.