Ben Pronsky
[view]
“You saw for yourself—my village is crammed full of a whole lot of nothing. I love it, though. All I need is a good axe, healthy trees, and some sunshine. My parents were the same way. I feel like I inherited the mountain from them.”
—Atlas to Celica in Shadows of Valentia

Atlas is a playable character from Fire Emblem Gaiden and its remake, Fire Emblem Echoes: Shadows of Valentia. He is a villager from Zofia who wants to rescue his abducted siblings. He is 20 years old.

A villager who dwells in a mountain village in Zofia, Atlas lived as a lumberjack, but after his little brothers were kidnapped by Grieth, he joined Celica to oust the thieves, and expressing deep gratitude towards Celica for helping him out.

Afterwards, Atlas returned to his village and resumed life as a woodcutter, but he was always one of the first to rush to Celica during emergency situations.

While he can seem gruff and unfriendly, Atlas is extremely passionate, being proud of living on the mountain that he inherited from his ancestors and feeling was regretful of allowing thieves to intrude the village while he was away serving the army, causing his brothers to suffer. Not only that, the animals exhibit less caution towards him and they seem to like him a lot.

Atlas is a unit plagued by some serious problems. His HP and his Strength are excellent, but the rest of his starting stats are low. He has below average growths, and in particular he has both very low starting Speed and very low Speed growth. He joins in Act 3 as a Villager that is ready to promote, meaning that he essentially joins you as an underpowered level 1 unit. However, unlike many other characters that join you underleveled, Atlas is not likely to turn out exceptional.

Similar to Gray, he can fix his Speed by promoting to a Mercenary. Combined with his high Strength and HP, this makes him a decent unit. The main reason this is a problem is because Atlas is recruited on Celica's route, where she can already recruit 3 Mercenaries (Saber, Kamui, Jesse) and an optional 4th Myrmidon (Deen), and Atlas will require a lot of care just to catch up in levels only to wind up likely being worse than they are.

He can also promote to Soldier, but he will need to be very well protected as he will do good damage, but be at risk for being Double Attacked by most enemy units at that point in the game. If you can babysit him until he can promote to Knight, he will wind up as a strong unit against melee attackers.

Of all the promotion options available to him, Atlas actually succeeds the most as an Archer, as his only competition in Celica's route is Leon. Leon is an Archer that unfortunately specializes in defensive stat growths. As Archers should not be getting attacked very often, this does not help him very much. Both Atlas and Leon have abysmal Speed, among the worst in the game. Neither of them are likely to Double Attack anything. However, Atlas on average will wind up with equal Speed and Skill and far superior Strength, making him the best Archer available to Celica.

Promoting Atlas to Mage or Cavalier is not recommended. As a Mage, he is stuck with his base Fire spell for a long time, and his spell list is not good. Celica already has access to a plethora of Mages, and all of them are superior to Atlas. While Celica has no access to any other Cavaliers, Atlas is simply too fragile and slow to effectively fill the role.

Similarly to Tobin, no matter what he promotes to, he is usually a worse version of some other character you have unless he promotes to Archer, but unlike Tobin you get Atlas later in the game so you have to put in some work just to catch him up.

*DLC class; access by visiting Shrine.
**Possible to loop back to Villager after Dread Fighter and Yasha.

Atlas requires some effort to be brought up to par due to his incredibly low base skill and speed for the time he joins, but excels in dealing raw damage to the opponent with his high base strength and growth rates. Atlas ultimately joins as a Villager, meaning he can be differentiated into a number of different classes immediately upon his recruitment.

Although Atlas' growth rates in skill and speed are by no means fantastic, they have been improved in Echoes, and Atlas joins late enough that right after he differentiates, he can grind on dungeons or map enemies for considerable experience relatively quickly. Although Atlas' stats outside of HP and strength are not likely to be fairly remarkable, his growths in those stats are average enough to support his incredibly high strength. His skill stat may be the possible exception, though it is only slightly higher than his speed, luck, and defense growths but nonetheless is likely to be higher than his speed stat.

Atlas excels in the Archer class, where he can exploit the extreme range of Bows to hit enemies with his high strength without much consequence. Atlas' speed is not very remarkable, leaving his ability to double attack enemies questionable; however, Atlas is capable of exploiting this by relying on the Weapon skills of Bows (such as the Iron Bow's Curved Shot and the Steel Bow's Heavy Draw, as he suffers little consequence in using them due to his incredibly high HP and not losing much from being unable to double attack, except for Hunter Volley from the Killer Bow. Atlas' only competition as an Archer in Celica's route is Leon (unless the player tries to recruit Kliff in this route by refusing his request to join Alm's party); when compared to Leon, Atlas will usually be much more powerful but have much less skill and usually a little less speed; however, the Archer class line is good enough to have two characters trained under it, as most enemies are incapable of striking back at an attack from four or five spaces away.

Atlas primarily excels in the Archer class line but has more room to explore other classes in Echoes due to his improved growth rates in skill, speed, luck, and defense. Atlas faces heavy competition from other characters in other classes, especially in the Mercenary class line, though Atlas' strength will overall be much higher than Saber, Kamui, Jesse, or Deen and all of the classes in the Mercenary line have incredibly solid bases in skill and speed to support it. Atlas can potentially build up more speed than Valbar despite having a lower speed growth due to Valbar's atrocious base speed and Atlas having several more levels to build up his speed, but Valbar is overall an incredibly solid armored unit that is weak only against enemy Fiends and magic users, meaning Atlas would have difficulties standing out if he goes down the Soldier class line. Atlas' only competition as a Cavalier (aside from Kliff or Faye if either of them is recruited in Celica's route) is Conrad; overall Conrad will have better stats than Atlas everywhere except in HP and strength, but he joins very late in the game and Conrad does have issues dealing a lot of damage to enemies due to his low base strength and growth. Between them, Atlas will be much better at exploiting the Cavalier line's good movement to reach enemies quickly and hit them hard, whereas Conrad will be better at hitting enemies in terrain, double attacking enemies, and taking hits from magic users (if either Kliff or Faye is recruited in Celica's route, Kliff's role as a Cavalier is similar to Conrad's whereas Faye will function as a less extreme, but more durable version of Atlas).

Ultimately, Atlas' role of inflicting raw damage has not changed much since Gaiden, but he has better growths everywhere (except in resistance) to support that role by leaving him more skill, speed, and defense to work with.

(Atlas will still leave the party, and can still come back, if recruited again.)

“Y'guys gonna go finish off Grieth? If that's the case, let me help out too. My little brothers and sisters all got captured by Grieth, but I don't know where to... Shit! That bastard Grieth is going down by my hand!!”
—Atlas' recruitment conversation
“T-too bad...”
—Atlas' death quote

After locating his younger siblings, he returned with them to their mountain village. It’s said that he’s now returned to being a woodcutter like he used to be.

After returning to the mountain home where his brothers waited, Atlas resumed life as a lumberjack—though his work defending the village from bandits continued to win him admiration. While retired from the army, he was always first to aid the queen in times of need.

Atlas is illustrated in the trading card game Fire Emblem Cipher with the following cards: 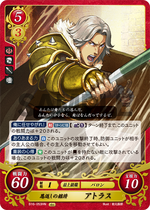 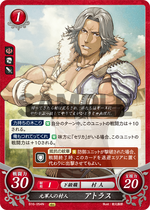 In Greek mythology, Atlas was a Titan condemned to hold up the sky for eternity. Coincidently, Atlas is from the Mountain Village.