“My name's Attrom. I'm from Blood--well, I grew up in Blood. I'm an orphan, so I don't know where I'm really from.”
—Attrom, introducing himself to Katri

Attrom (アトロム Atoromu) is a playable character from TearRing Saga: Utna Heroes Saga. He is a swordfighter hailing from Blood. He is unknowingly a son of Admiral Vals of Granada and the younger half-brother of Holmes. Depending on events triggered during the story, he can become Lyria's love interest.

At the age of five, Attrom was left at an inn by his mother, who was a dancer. He was eventually taken into the care of Renee, who spend one month nursing him back to health. Afterwards, he was brought to the Church of Blood and adopted as Renee's younger brother.

After Renee leaves Blood in search of Meriah, Attrom begins searching for her. He eventually finds Renee in the captivity of the Isla Pirates led by Maerhen. In an attempt to rescue her, he rushes into a battle against the pirates, during which he is reinforced by Holmes's army. At the end of the chapter, Attrom reveals to Katri that he has no knowledge of where he was born, much like her. He also states that he feels powerless for being unable to save Renee, who had always been there for him. During the next battle with the Isla Pirates, Renee is pushed overboard Maerhen's ship by his men, causing Attrom to believe that she is dead. As a result, he and Holmes begin their search for the legendary ☆Dakruon in order to revive Renee.

When Holmes arrives in Blood, Attrom can visit the local temple and recruit Lyria, who wishes to travel around the world as a singer. Later in the game, he can rescue Lyria from a slave trader if Yuni was not captured instead. During Holmes's liberation of Granada, Attrom finds Renee among the Canaan soldiers led by Shion and recruits her.

In the ending, Attrom is asked by Holmes to travel to Granada for reasons unknown to him if the aforementioned event between him and Lyria occurred. In this scenario, he is accompanied by Lyria, who decides that she will sing for him. If he did not rescue Lyria from the slave trader, he travels to Salia with Renee and her lover, Lionheart.

Automatically from the start of Map 12.

While Attrom starts off weaker than Holmes' army when he joins, he will quickly grow into a very powerful unit. Attrom's greatest strength is his stats, which should end up comparable to Xeno's, though Attrom should have a slight edge in Strength and Speed with slightly inferior Luck. On the skills side, his Blazing Wind, though can be useful, it's not reliable enough. Heaven Saint, on the other hand, is a solid skill that gives him some longevity on the field. However, his skillset is outclassed by Xeno's slew of powerful and useful skills. In conclusion, he is a boon on the field and is more than worth using to the end. 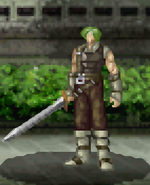 Attrom's battle model as a Fighter.