Varies
[view]
“Light magic for women (Linde can use at level E)”
—In-game description, Shadow Dragon and New Mystery of the Emblem

First appearing in Fire Emblem: Shadow Dragon and the Blade of Light as a high-level Magic tome, Aura conjures a tower of light-infused rings into battle when cast, which promptly rise up into the air before crashing down upon a selected enemy target.

In the Japanese versions of Fire Emblem: The Blazing Blade and Fire Emblem: The Sacred Stones, this tome is also known as Argyraurae (アルジローレ Arujirōre), where it is considerably more powerful than the Divine spell.

In the original Fire Emblem: Shadow Dragon and the Blade of Light and Fire Emblem: New Mystery of the Emblem, Aura is a B-Rank Tome, and can only be wielded by Linde as she is the daughter of the original owner of said tome, Miloah. However in the remake version, Shadow Dragon, any female unit can wield Aura at A rank, though only Linde can use Aura when her tome mastery level is E.

In Fire Emblem: Genealogy of the Holy War, Aura first appears as an A-Rank tome in possession of Deirdre upon her recruitment. Due to Deirdre having Major Naga Blood, she can wield all ranks of light tomes, effectively making her the only person in the first generation capable of wielding Aura, despite it not being unique to her, as no other character in the game can achieve higher than B-rank proficiency in light tomes. In the second generation, Julia inherits major Naga blood from Deirdre, making her the only other character capable of wielding Aura in the game. Unlike Deirdre, however, she does not come with the tome when recruited, but it can be given to her if Seliph captures Sophara Castle in chapter 6 before capturing Isaach Castle. (Capturing Isaach Castle first allows Seliph to give Julia the Nosferatu tome, effectively making Aura inaccessible for the rest of the second generation). The tome has no relevance to the story, or to the characters that wield it, and is not treated as a unique or legendary weapon.

In Fire Emblem Heroes, a variation of Aura called Dark Aura (共鳴オーラ, Kyōmei Ōra lit. Resonance: Aura in the Japanese version) appears as the exclusive skill of Delthea, although Linde's Aura tome can evolve into this variant through the weapon refinery feature.

The weapon returns in the spin-off title Fire Emblem Warriors as the personal weapon of Linde.

In Three Houses it's a Faith spell that can be learned by some characters if A rank is reached.

* - Shadow Dragon only; Weight is an unused weapon stat in New Mystery of the Emblem.

In Fire Emblem Warriors, Linde claims in a support with Tharja that Miloah sealed Aura to only work with female magic users to prevent it from falling it into the hands of evil. This information isn't supported in any other sources of information.

"Aura" is derived from the Latin word aurum, which means "gold". Aura, as a magical weapon, could also be a reference to a glowing, magical force that surrounded angels and other sacred people in medieval Christian art. These auras—or "halos"—were generally depicted as glowing golden circles surrounding the angels' heads.

Aura in the TCG.

Animation of Linde casting Aura in Fire Emblem: Shadow Dragon and the Blade of Light.

Linde casting Aura on an enemy Sniper in Shadow Dragon.

Animation of Linde casting Aura in Mystery of the Emblem.

Deirdre casting Aura in Genealogy of the Holy War.

Artur casting Aura on Fomortiis in The Sacred Stones.

Linde casting Aura in New Mystery of the Emblem. 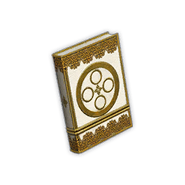 Aura as seen in the Warriors convoy.