-
[view]
The Axe Soldier is an unused class in Fire Emblem: Genealogy of the Holy War. It is an axe wielding variant of the Soldier class.

In TearRing Saga: Utna Heroes Saga, the Axe Knight class seems to be heavily inspired by this unused class.

The Axe Soldier proper appears in TearRing Saga: Berwick Saga as an enemy class that accompanies Spear Soldier and Archer as common enemy units. The class wields axes and small shields. Axe Soldiers are usually weak, but individual ones may have good stats or special skills. 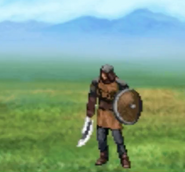