Axel (アグザル Aguzaru) is a playable character from TearRing Saga: Berwick Saga. He is a hardened man of the sea fighting to afford treatment for his adopted daughter’s blindness.

Axel is a surprisingly good character, if not for his stats then for his utility value. Statwise, Axel is pretty much a glass cannon, having very good HP, Strength and Agility, but zero defense growth and low Axe skill growth, which makes him really inaccurate. Skillwise, Axel is the only character to have the Search skill that is not a thief, allowing him to actually defeat whoever is guarding the treasure without much trouble. He is also the only character to have Swim, which allows him to move on water - and there are a lot of points where that ability is useful. Hide allows Axel to reach Search areas unhindered, and Pulverize is one of the most powerful damage boosting skills in the game. Axel is not much of an endgame material, though, due to his low defense and the fact that his utility skills are not needed there. 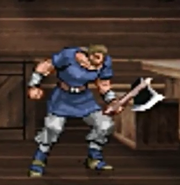 Axel's in battle sprite
Add a photo to this gallery