Austin Lee Matthews
[view]
“Yeah, when I heard that you had been kidnapped, I couldn't concentrate on anything! I came as fast as I could.”
—Azelle

Azelle is a playable character from Fire Emblem: Genealogy of the Holy War. A mage and prince of Velthomer, and a descendant of Fjalar, he is also the son of Victor and paternal younger half-brother of Arvis, with his mother being Cigyun's favorite maid.

Azelle is 18 years old, in the Mitsuki Oosawa manga.

About twenty years before the beginning of the game Azelle's father, Victor raped a maid in the service of his wife Cigyun and from that assalt came Azelle. Cigyun fled after and upon learning that she had entered a relationship with Prince Kurth Azelle's father killed himself leaving Azelle to be cared for by his half-brother Arvis.

Worried about the cleric Edain, Azelle, along with his close friend Lex, both joined Sigurd's army in the events of the prologue chapter. He is also childhood friends with the Thunder Mage Tailtiu.

Azelle's fate after the Battle of Belhalla is unknown, with certain rumors suggesting that he is taken into custody by Arvis, and others suggesting that he succumbs to an unnamed illness. This is most likely credited to Arvis's words to Sigurd, "Azelle may be a half-brother of mine, but he means the world to me." Shouzou Kaga originally intended for Azelle to appear in the second generation, where it is discovered that he has been turned into a statue, alongside the other survivors from the Battle of Belhalla.

Azelle is shy and studious, with both traits being exemplified when compared to his hotheaded friend Lex and his happy-go-lucky childhood friend Tailtiu. This may be attributed to the fact that he is the bastard child of Victor, resulting in him being constantly bullied by most of his peers.

Azelle is a Mage that specializes in Fire Magic and joins you on the very first map of the game. Azelle is a typical glass cannon Mage, capable of dealing a lot of damage early in the game even with a simple Fire tome due to his very high starting Speed and Magic, his strong Speed and Magic growths, and his Pursuit skill. Combined with the fact that almost no enemy units early in the game have respectable Resistance means he should be able to deal big chunks of damage to enemies early on and in many cases outright kill them. This also makes Azelle very proficient at weakening Boss units to very low HP. However, while Azelle can dish out the damage, he cannot take it, and leaving him in range of 2 enemy attacks is potentially deadly.

Azelle starts out being a bit difficult to utilize properly, as the maps in Genealogy of the Holy War are very large and Azelle's low Movement will make it difficult for him to keep up with your other units to gain experience. Combined with his fragility, this makes it a bit difficult to make effective use of him compared to other characters. Another issue that can make Azelle seem a bit weak in comparison to other characters is that tome availability for Azelle is fairly limited for most of his generation, where other units in Sigurd's army will generally have access to stronger overall weaponry. It does not help that Fire tomes are absurdly heavy in Genealogy of the Holy War, which severely hampers Azelle's otherwise amazing Speed stat and makes it more difficult to trigger Pursuit.

That being said, eventually, when Azelle promotes to Mage Knight, he will transition into a high-mobility ranged unit that drastically improves his versatility and usefulness. While Azelle is unlikely to wind up being among the strongest units in your army and he can be difficult to bring to promotion, he nonetheless becomes a solid mounted unit if you do manage to promote him and one of the few highly mobile units capable of dealing high Magic oriented damage.

Azelle can be a bit difficult to pair well. Even with his Holy Blood, his growths are actually rather poor for most children to inherit since his stats are not very good for physical units. Only two pairings allow him to actually pass his tomes to his children, though his B-rank Swords give him more options for inheritance. On the plus side, he has Pursuit, which while common, is very important for children to inherit and not all characters have it. Lastly, he passes on the highest Magic growth of any father in the game.

Azelle is best paired with Tailtiu or Lachesis. Edain, Erinys, and Sylvia are okay pairings. The rest should generally be avoided because they are physical units that will be made statistically inferior by Azelle's growths and receive few or no weapons.

In the Prologue, Azelle may speak to Sigurd, but nothing will result of it.

In Chapter 1, Azelle may speak to Edain, resulting in her gaining 100 love points with him.

In Chapter 4, if neither Tailtiu nor Azelle has lovers, she may speak to him, resulting in her gaining five points of HP and 100 love points with him.

In Chapter 4, if Edain and Azelle are lovers, she may speak to him, resulting in her receiving the Rescue Staff.

In Chapter 5, Lex may speak to Azelle, but nothing will result of it.

In Chapter 5, if Tailtiu and Azelle are lovers, she may speak to him, but nothing will result of it.

Youthful Flame
Half brother to the head of House Velthomer, Arvis. Compares himself to his older brother and suffers from an inferiority complex. Appears in Fire Emblem: Genealogy of the Holy War.

Azelle is illustrated in the trading card game Fire Emblem Cipher with the following cards: 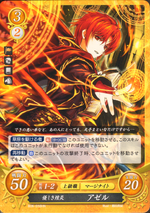 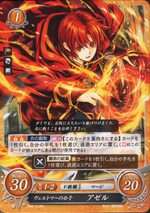 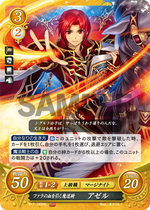 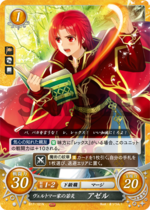 Azelle is a name of Hebrew origin, which hereby means 'noble'. This could reference his alliance with Sigurd, and that he is also a noble.