Back to Mystery (紋章再び, Monshō Futatabi lit. Emblem Again) is the fifth chapter of Book I of Fire Emblem Heroes. 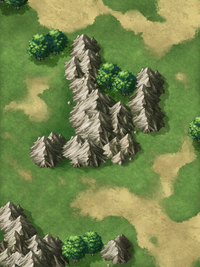 You will have 4 units on your team. You will also have 4 opponents: Navarre, Wrys, and 2 Emblian Thieves.

Send your own Thief unit, your Archer unit, or your Magic unit on both sides of this map in order to lure the enemy Thief units to their attack range. Once it's done, take them both out.

But, you should defeat Wrys first, as he can heal a Thief unit during the Enemy Phase. Also, send your powerful Lance unit or your Blue Magic unit to the northeast of the map and defeat Navarre. 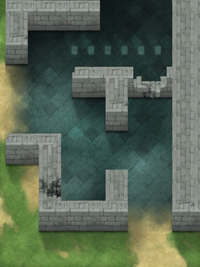 You will have 4 units on your team. You will also have 4 opponents: Minerva, Maria, an Emblian Bow Fighter, and an Emblian Sword Knight.

There is a crack wall on the lower left of the map, but be careful, if you decide to break the wall, your unit will get ambushed by an Emblian Bow Fighter. Be sure to send your powerful Magic unit, your Archer unit, or your Thief unit to the enemy's attack range, as your units can take him out. If you decide to go to the right instead, then make sure you move your powerful Lance unit or your Blue Magic unit to defeat an Emblian Sword Knight, as he has his higher attack and defense powers.

However, Minerva and Maria will get your attention and move closer to your units. Your best hope is to send your Sword unit, your Red Magic unit, or your Archer unit to defeat Minerva. Once you dealt with her, defeat Maria, and fast, because she can heal an enemy unit during the Enemy Phase. 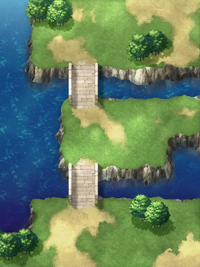 You will have 4 units on your team. You will also have 4 opponents: Barst, Jeorge, an Emblian Bow Fighter, and an Emblian Lance Knight.

As the title says, there's no way out, because you're surrounded on a small island by Jeorge and an Emblian Knight on the North side of this map and by Barst and an Emblian Bow Fighter on the South side. The only way to clear the stage is to defeat the enemies.

First, send your powerful Axe unit or your Green Tome unit with a Hammer weapon to defeat him. That will get Jeorge's attention, though, so watch out. If you managed to survive that attack, defeat Jeorge.

Then, send your units with an attack range to lure that enemy Bow Fighter into your trap, and then take him out. Finally, send your powerful Sword unit or your Red Tome unit to defeat Barst. 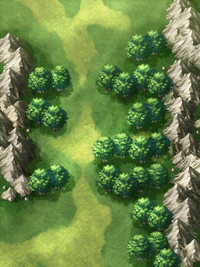 You will have 4 units on your team. You will also have 4 opponents: Palla, Catria, Est, and an Emblian Axe Knight.

Palla, Est, and Catria have surrounded an Emblian Axe Knight to protect him. As soon as you make your first move, the three Pegasus Knights Sisters will fly forward to about a square before your attack range. If you have more than one Archer unit on your team, it should be easy to take all three of them out at once.

But be really careful, the enemy Axe Knight has a lot of defense power, so your Archer unit might not make a dent on him. Be sure to have your Red Tome unit on your team, you need that unit to defeat that Axe Knight at ease. 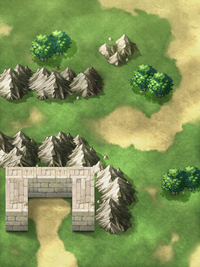 You will have 4 units on your team. You will also have 3 opponents and one boss: Young Tiki, Minerva, an Emblian Lance Fighter, and an Emblian Thief.

Your team starts right behind the mountains, so your team can't get through, unless you have your Pegasus Knight unit or your Wyvern Rider unit. But once your Player Phase ends, the Enemy Phase begins and Tiki will start moving.

Make sure you send your powerful unit with an attack range to attack and defeat the Emblian Thief first. That will also have an Emblian Lance Fighter to move forward, though, so be aware of that. Once you've taken both enemies out, Minerva will fly forward to your team. After defeating Minerva with your powerful Sword unit or your Red Tome unit, when Tiki is close enough, take her out with your Lance unit or your Blue Tome unit. However, if you have Marth on your team, then it's much easier to defeat Tiki with his Falchion, as the Falchion is effective against Dragons.