The Ballistician (シューター Shūtā, lit. Shooter in the Japanese version) is a combat physical class that is first introduced in Fire Emblem: Ankoku Ryū to Hikari no Tsurugi. Soldiers who operate either Ballistae or Bows as their weapon of choice, Ballisticians are defined by high Defense and attack range that are offset by low Movement.

In Ankoku Ryū to Hikari no Tsurugi, Ballisticians function as high-Defense Archers, somewhat like the later Bow Armor class. They are able to access Arenas in this title.

Starting from Mystery of the Emblem, Ballisticians are revamped as a non-playable class with an attack range of 3-10 and zero Movement. This trend is continued in Genealogy of the Holy War and Thracia 776, both of which feature variations of the standard Ballistae weapons that include the Poison Arch and Iron Ballista.

In TearRing Saga: Utna Heroes Saga, Ballisticians are split into Quick Rain (クインクレイン Kuinku rein) and Stonehedge (ストーンヘッジ Sutōnhejji), each of which are confined to attacking with the weapons that they are eponymously named after. Both classes are near enemy-exclusive; their playable counterpart, the Wood Shooter, assumes the classes when equipped with Quick Rain and Stonehedge weapons.

The Ballistician class is absent from Binding Blade to Radiant Dawn. Ballistae still exist in these titles, although they can only be operated by Archer-based units.

The onset of Shadow Dragon sees Ballisticians once again revamped as a combination of all versions of the class that have thus far manifested. Ballisticians retain their long range from the SNES titles, alongside their low Movement from the NES titles. The class was again made enemy-only in the sequel Shin Monsho no Nazo.

After an absence from Awakening, the Ballistician class is reintroduced to the series in Fates, where it can only be accessed by male units through the use of DLC-exclusive Sighting Lens.

Ballisticians, like Archers, are able to deal effective damage against Flying Units, owing to the existence of a common ballista weapon that is known as the Arrowspate.

Ballisticians are usually best for outdoor skirmishes, but can function decently well in smaller ones due to their superior attack range. Unable to inflict enough damage to kill enemy units without aid from other units, Ballisticians are especially helpless in later levels that feature Fortify-carrying Curates. However, they are very useful in taking out Curates located at far-off distances, thereby greatly reducing the enemy's ability to recover HP. The strength of Ballisticians can be greatly increased through level ups and the tempering of their ballistae.

Ballisticians in this title are very helpful in multiplayer battles. Their attack range is extremely deceiving; even though they have low movement and are locked to using Bows, their ballista attacks can launch projectiles into enemies far away for high damage, especially against flying units. Skills learnt by Ballisticians only work so long as they remain in the class, as they are not compatible with other classes.

Like in the older titles, Ballisticians are plagued by poor Speed, which can allow most enemy units to double attack them if they are left in the open. Their poor Speed can potentially result in them being killed instantly in battle, especially if they are equipped with powerful weapons and/or abilities. Their Movement is also akin to that of a Knight, a problem that can be remedied by outfitting them with the Surefooted skill.

The disadvantages highlighted thus far should not deter players from utilizing the Ballistician class. They have slightly more Strength than Snipers, and their worth takes the form of the long-range attacks that they can inflict. Unlike the set ballistae found in the main storylines, the damage and accuracy of the "cannons" that Ballisticians employ are based on the Bow that is equipped. Normally, the attack radius of the Ballistician class is 2-5 tiles (in a cross formation); with the Rifled Barrel skill, this is increased to 1-6 tiles. The "Cannon" ability of the Ballistician is also unaffected by skills like Bowbreaker and Aegis, and when given bows like Setsuna's Yumi, will also stack debuffs on the hit targets to further dampen the strength of the enemy. Players should be aware that user skills do not activate and will not outright kill opponents (instead leave them with 1 health) when "Cannon" is used. In addition, the "Cannon" option will not drain stats post-battle even if Bows like the Silver Bow are used.

Out of the four Ballistician skills available for Ballisticians, Surefooted, Rifled Barrel and Opportunity Shot are perhaps the most useful. However, players who have their Ballistician carry Rifled Barrel should be wary as the increased radius size may make it harder to hit a specific target without accidentally hurting ally units. The remaining two skill slots should be filled with skills to benefit the Ballistician, such as Movement +1 or any one of the Rally skills, as their Speed prevents them from double attacking most enemies in battle.

Mystery of the Emblem / Shin Monshō no Nazo

Artwork of a Ballistician from the TCG.

A Level 10 Ballistician, as he appears in the sixth series of the TCG. 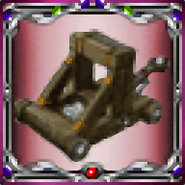 Generic class portrait of the Stonehenge class from TearRing Saga. 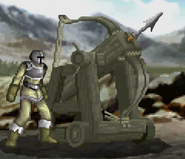 Battle model of the Ballista class from TearRing Saga.

Battle model of the Stonehenge class from TearRing Saga.

Battle model of the Ballistician class from the DS titles.

Battle model of the Ballistician class from Fates.

Map sprite of the Shooter class from Ankoku Ryū to Hikari no Tsurugi.

Map sprite of the Shooter class from Mystery of the Emblem.

Map sprite of the Ballista class from TearRing Saga.

Map sprite of the Stonehenge class from TearRing Saga.

Map sprite of the Ballistician from Shadow Dragon.