The Balmung (バルムンク Barumunku, translated Balmunc in the Fire Emblem Museum and Balmunk in Fire Emblem Treasure) is one of twelve holy weapons from Fire Emblem: Genealogy of the Holy War. Balmung is the blade that was wielded by the Crusader Od, and is the insignia representing the Kingdom of Isaach.

In Genealogy of the Holy War, only individuals possessing major Od holy blood are able to wield the blade. Hence Shannan is the only character who can use the blade.

The Balmung reappears in Fire Emblem Awakening, where it is wielded by Simia in Chapter 22. Much like the other Crusaders' Holy Weapons, Balmung's power has greatly waned over the millennia, and its blood link along with it.

After the conclusion of the Isaachian-Grannvaleian war, the Balmung blade is stored in the Yied Shrine. In Chapter 6, Patty/Daisy infiltrates the Yied Shrine and takes the Balmung blade. Just as she is about escape the shrine, Shannan, who has embarked on a mission to retrieve it, intercepts her. He then convinces her to give the blade to him, explaining that he is the only one able to use it.

After 3,000 years, Balmung is wielded by the Deadlord Simia. Yewfelle, Helswath, Gungnir and Valflame were placed in the hands of the Deadlords Draco, Tigris, Equus and Canis respectively whom had been summoned alongside the remaining Deadlords by Aversa in Chapter 22 in Awakening. As to how the Grimleal managed to obtain these legendary weapons remains a mystery.

Balmung may have been named after Siegfried's sword in the Nibelungenlied. This is a translation from the Norse myth, where Balmung is known as the Gram (Meaning 'wrath' in Old Norse), a sword that was wielded by Sigurd in order to slay the dragon Fafnir. It is called Nothung in Richard Wagner's Ring Cycle.

According to legend, Balmung was forged in the Wayland of Smith and originally belonged to Sigurd's father, Sigmund. The sword came into the hands of Sigmund in the hall of Volsung, after performing the feat of pulling it out of the tree Barnstokk into which Odin had thrust it, defying the belief that it could not be wrenched from its position. Balmung was later destroyed and reforged at least once, a fact that resulted in it possessing the ability to cleave an anvil in twain.

Interestingly, the Japanese romanisation for Siegfried's sword is almost always Balmunc (バルマンク Barumanku) instead of Balmung (バルマング Barumangu), the latter of which is the spelling that is utilised in-game.

The Balmung blade, as it appears in the third series of the TCG.

Official artwork of the Balmung blade from Fire Emblem Museum.

Shannan wielding the Balmung blade in Genealogy of the Holy War. 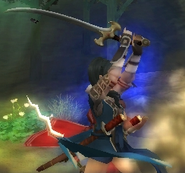 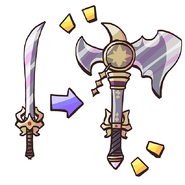