Subaru Kimura
[view]
“We're the secret fourth house in Abyss. The surface world turned its back on us, and we did the same in return.”

Balthus is a rowdy man from the Leicester Alliance. The self-proclaimed "Leicester's King of Battle". His hearty and careless personality are what lead to him becoming a fugitive, so he hides out in the Abyss. He follows his desire to protect the people of Abyss who sheltered him, as well as his fighting instincts, thoroughly thrashing any intruders.

Balthazar (also spelled Balthasar, Balthassar, or Baltazar) means "Bel protects the King". It is an alternate form of the Babylonian king Belshazzar. It is the name commonly attributed to one of the Three Wise Men. 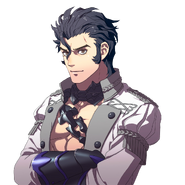