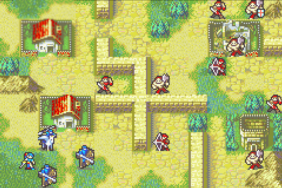 Chapter script
[view]
“The secrets of her past revealed in the words of two Knights of Lycia. Now, to meet her grandfather, Lyn heads west, to Lycia, and to her destiny. A mountain range separates the Sacae Plains from Bern. There are many bandits lurking here, the cruelest of which are the Taliver. They create havoc on both Sacae and Bern, and their savagery knows no bounds. On her tenth day away from the plains, Lyn witnesses their atrocities herself.”
—Opening Narration

Band of Mercenaries is Chapter 3 of Fire Emblem: The Blazing Blade.

On the tenth day after leaving the plains, Lyn's group comes upon a village that has been ransacked by bandits. While examining the place, Lyn finds Florina, her friend and a Pegasus Knight. She is being hassled by two bandits because her Pegasus landed on one of them. Lyn tries to settle things, but the bandits become upset and attack. After defeating them, Florina explains why she was there, to gain experience as a mercenary, and Sain recommends that she and Wil join their group. They both agree.