Chapter 7: Lefcandith Gauntlet (Shadow Dragon and the Blade of Light)

Joe J. Thomas
[view]
“You there. Have you come across a young girl, one by the name of Tiki? She must be found, boy! Tiki is the last of the Naga, the divine-dragon clan.”
—Bantu in Fire Emblem: Shadow Dragon.

Bantu is a playable character in Fire Emblem: Shadow Dragon and the Blade of Light, Fire Emblem: Mystery of the Emblem, and their remakes.

Little is known about Bantu's background outside his history with Tiki and his strong resistance to madness, unlike other Manaketes.

Prior to the events of Shadow Dragon and the Blade of Light and its remakes, Bantu took pity on the Divine Dragon Tiki, who was sent to sleep in the Ice Dragon Temple by her mother to protect her from lapsing into insanity. He then chose to, against Gotoh's strict instructions, rouse her from her slumber and thereafter explore the human realm with her. At some point of time during his travels with her, the two were separated. When Marth visits the Lefcandith village that he later takes up temporary residence in in Chapter 7, Bantu, in a state of panicked agitation, urges him to aid him in locating Tiki. The pair is reunited in the Fane of Raman in Chapter 19, where he is instrumental in freeing her from the spell of hypnosis that Gharnef had placed on her. After the end of the War of Shadows, Bantu seals the power of the dragonstones and takes Tiki to live a life of tranquility in the Dolhrian countryside.

Some time preceding the events of Book 2 of Mystery of the Emblem and its remake, Bantu and Tiki are separated yet again, as Gotoh makes the decision to return her to sleep in the Ice Dragon Temple. When Marth later encounters Bantu in the eastern village on an island by Cashmere Bridge in Chapter 8, Tiki's fate is made known to him, and Bantu thereafter chooses to enlist in his army. Bantu will then aid Marth in bringing the War of Heroes to an end, and after abandoning his Firestone, sets out for parts unknown. Some light on this journey is shed in his final base conversation with Tiki in New Mystery of the Emblem, where that he seeks to find, and help other kindhearted Manaketes similar to himself, who are viewed more then ever with fear, and loathing by mankind in light of Dolhr's actions in the past two wars. Bantu explains he intends to provide moral support to those Manaketes in their desolation, and show to humanity that not all Manaketes are bad. Before this journey, Bantu promises to return by the time Tiki is a little bit taller, roughly his height.

Apparently, Bantu has lived and endured long enough to meet Nowi, a Manakete born 1000 years after the events of the War of Shadows and Heroes.

Bantu can best be perceived to be in possession of a gentle, docile disposition, a fact made evident through the mild register that he employs in his speech. An example illustrating this is that of the second recruitment conversation with Marth, where, despite being aware of the ongoing chaos outside the village he has taken up residence in, he still speaks in an affable manner nevertheless.

Further bolstering Bantu's personality is the fact that he is rather tender-hearted, where he uses his heart as a moral compass more than he does his mind. This is proven through his taking pity on Tiki's plight, electing to defy Gotoh's orders by rousing her from her slumber and taking her away from the Ice Dragon Temple to explore the human realm. Bantu's interactions with Tiki also reveal an inclination to be patient, one that he exercises in obliging to her whims. His first base conversation with Tiki, for one, sees him not reprimanding her for having broken Marth's mirror, choosing instead to calm her down and coax her into believing that she had been forgiven by Marth.

In spite of his forbearing countenance, Bantu evidently wields a very strong will; one that is strong enough to resist being driven to madness like the bulk of his kin was. Bantu is shown to possess a strong moral compass, and unlike many of his kind, refuses to hate humans.

Bantu is an interesting unit; he possesses extremely low growths and seemingly low base stats, but his unique weapon makes him a powerful unit for much of the game. When wielding his exclusive weapon, the Firestone, Bantu gains a massive 12 stat boost to his Defense, giving him 15 defense. Bantu's massive defense makes him a perfect tank, able to shrug off attacks from the majority of enemies in the game, with magic users being the only regular threat to his scaly hide.

Not only does the Firestone give defense to Bantu, the weapon has a might of 16, significantly higher then silver weapons and thus allowing Bantu to deal significant damage to enemy units throughout the game. The Firestone has a very low weight of 3, giving Bantu opportunities to Double Attack. Best of all, the Firestone is entirely unbreakable, meaning the player can use it to their hearts content.

In chapter 19, Bantu is able to recruit fellow Manakete, Tiki, a powerful unit and one of the only two units to possess a higher base defense then Bantu(the only other unit with a base defense above 15 is General Lorenz.

Due to Bantu's low growth rates, it is advisable not to let Bantu deal too many finishing blows on many enemies, instead it is best to use other units deal the coup de gras on Bantu's foe for the EXP. If the player needs another unit for the lategame, Bantu does well when given Stat boosters to further empower him, a single Speedwing allows him to keep up with the other lategame units.

All in all, Bantu is a unit that shouldn't be overlooked.

While Bantu's growth rates remain some of the worst in the game, his base stats as a Fire Dragon are higher than most Enemy Dragons in the early to mid game. Bantu's Fire Breath ignores enemy defense, his considerable stats for the period allow him to kill, or greatly weaken enemy units with ease early on, allowing others in your army to finish off the weakened enemies for the EXP.

Like all Dragon units, Bantu has his defense taken into account when attacked by breath weapons, this allows him to act as a tank against enemy dragons, and block dragon reinforcement points. Bantu's fire breath is extremely effective against enemy Ice Dragons, killing them in one attack, or weakening them enough for others to finish them off.

As mentioned, Bantu's stats are extremely poor, if Bantu is close to leveling, and no one else is in need of it, Starsphere Shards can be used to considerably boost his growths. Due to how dragons work in the game, it is recommended to give Bantu shards that increase Defense such as the Cancer shard(increases defense growth by 50%).

Unless Bantu has grown particularly well with Starsphere shards, it is recommended to retire him by the time Tiki is recruited. Unlike Tiki, Bantu is unable to use the Ice, Wyvern, and Magestones. While Bantu does gain higher stats when using the Firestone, it is not enough to keep up with Tiki.

Bantu has relatively high attacking power and accuracy at base level, but those are largely it for his good points. He has lost many of the strong traits that he possessed in earlier games, while his weaknesses of nigh-nonexistent growth rates and reliance on his Firestone remain. He lacks range, his somewhat high Defense is counteracted by poor HP, and he has no ability to reclass. What is more, the Firestone has no unique attacking advantages aside from its power, and it consumes a use whenever Bantu enters combat, meaning he can have it drained simply by enduring a ranged attack, which is very problematic when the Firestone is also extremely rare. Generally, the most Bantu can manage is chipping an opponent with high Might; only Barst with a Devil Axe or an effective weapon-user outclasses him in damage at his join time.

Bantu is commonly considered the worst unit in New Mystery of the Emblem, an accomplishment for a game with such a massive roster, and possibly one of the worst units in the series as a whole. His bases even with his Firestone are pathetic, to the point of being wholly outclassed by units that share his join time or even join well before him. On standard Hard Mode, he can be doubled by the faster enemies in his join chapter, and on Maniac, he can be killed in a single blow by some of them. Even on Normal Mode, where many melee characters can easily withstand multiple rounds of combat, Bantu struggles to survive more than two hits. Bantu's growths, as ever, are some of the worst in the game, to the point that even a level 30 Bantu averages around 11 Speed with his Firestone. Where once his base attacking power was unusually high, it is now barely above-average, with most B-rank weapon users being on par or outclassing him with silver weapons. He has no ability to reclass, leaving him stuck as a manakete with mediocre movement and only one wieldable weapon with no unique traits, no range, and limited supply. In exchange, he offers no special utility or benefit barring combat that is unimpressive at best and moribund at worst. To make Bantu a viable unit tends to require investment on the level of giving him every single available statboosting item, including the Secret Shop and Lunatic statboosters, and even afterward, he tends to be barely on par with his fellows.

Tiki's Guardian
A manakete of the Fire Dragon clan, and Tiki's guardian. He released Tiki from the Ice Dragon Temple, where she had been kept hidden away. Appears in Fire Emblem: Mystery of the Emblem.

Fire Dragon
"Bantu sealed the dragonstones’ power and disappeared, but his wish was to live out his years in the Dolunian countryside."

Bantu is illustrated in the trading card game with the following card: 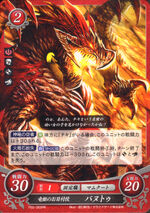